In early January I received two 2008 Topps Lettermen football cards (very shiny and numbered to 25) by mistake in an eBay auction. When I say by mistake, I mean that the seller sent me the wrong cards. I was supposed to get a 2008 Donruss Threads Mike Schmidt card numbered 49/250. Instead I got the football cards. The seller immediately refunded my money and didn't want the cards back. So I posted them a few weeks ago and offered them in trade. Max made me an offer I liked so we made the trade. Max doesn't have a blog (as near as I can tell) but has been one of my readers. (thanks Max). So here's what he sent me: 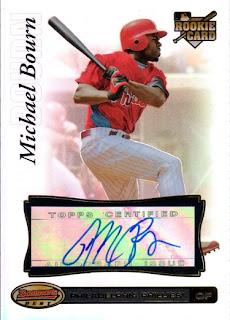 Somehow I've never seen any 2007 Bowman's Best, in fact, wasn't even aware of the set. Bourn played one year for the Phillies before being traded to the Astros for Brad Lidge. Lidge went on to lead the Phillies to the World Series. Bourn, well, he didn't lead the Astros anywhere. But apparently he had a good season of winter ball and hope always springs eternal in the spring. 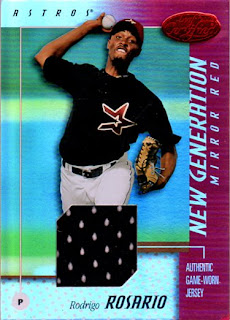 Mirror Red is a parallel of the base set. Most of the base set of 2002 Leaf Certified was composed of relic cards. I'm happy to have this because I didn't have any of these. Rosario started 2 games for the Astros in 2003, winning 1. He's not been heard from again. Since this is a game-used jersey, it must have been worn during one of his two games, both which were in June 2003. So I probably know more about this jersey card than most. There is a picture of the actual jersey on the back of the card. The card is serial numbered 112/150. 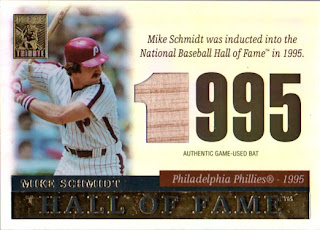 This is a way better card then the Schmitd I was supposed to get in the eBay deal.

Max also threw in a 2002 Bowman's Best Brad Lidge from his Astro days. This card didn't scan well so I didn't post it.
Posted by capewood at 7:37 AM

That Schmidt card is awesome.

Max here (the trading partner). I am thrilled you like the Schmidt card, it is a fantastic card (as most of those Topps Tribute Game Used are). I remembered where I got that card after reading your write up. At a local show, I bought a couple of higher end game used cards from a dealer - a Gary Carter 8/8 (his jersey # and my favorite player) and a Roberto Clemente jersey /99 - and we were dickering with price when I said "I will pay full price for these cards if you let me have 5 of your '5 for $25' cards with them" and he agreed. Since I already had 3 of the 5 already scoped out, I picked what I figured to be the 2 other best ones, regardless of my player/team preference. One of them was this Schmidt card. It then sat in a box in my collection, only to be discovered when I didn't find that Lidge card (which I still can't find btw). So it took a whole lot of coincidence and happenstance for that Schmidt card to find it's way to you. I am glad it found a good and proper home.

p.s. I am currently blogless and you are very welcome. I hope we can trade again and let me know when my second package arrives.