Back in January I wondered if there were any blogs devoted to baseball cards. So I went to Google, typed in "baseball card blogs" and found The Baseball Card Blog. Ben Henry's blog (now since retired) had been published since January 2006. I also found Stale Gum, Chris Harris' blog which has archives going back to May 2001, but he's been doing this since 1998. Through them, I found other blogs. After reading them for a few weeks, I decided I could do this as well. Capewood's Collections was launched on February 1, 2008, with the pride of my baseball card collection, a Mike Schmidt rookie card.

At the time, I figured I'd be lucky if I could get a few of my friends and relatives to read it. Since few of them are interested in baseball cards, I wanted to have a broader appeal. I wanted to feature a number of things I was interested in such as photography, bonsai plants, old postcards, music, etc. Here's what 262 posts over the past year have amounted to: 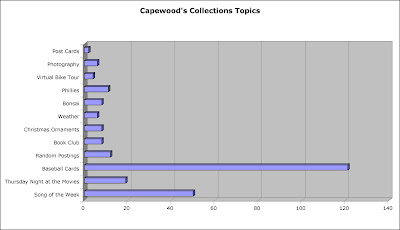 It's been mostly baseball cards. Since I started, a lot of other people have started baseball card blogs (and I found a few more which predated me). And I found that these people were reading mine. So my audience isn't what I expected. Frankly, I didn't expect to have an audience at all. I'd read that the average blog has 1 reader. I'm way ahead of that. I'm currently getting 40-60 hits a day which is great. Doing this for the past year has been a rewarding experience. I've met some very nice people on-line and feel a part of a community of collectors.

2008 was an eventful year for me. My daughter graduated from college, we survived Hurricane Ike, I had 3 stents put in my heart. It was great being able to share my life and my baseball cards with so many. Thanks to you all.

Congratulations on your blogging anniversary & good luck for year two!

Congrats for one year and good luck on your second ! Like you , I'm working on my Indian want list , I'm constantly trying to add to it.I have a LOT of cards to trade and I'll be checking on your lists.

Congrats on One Year . . . Happy Anniversary !

Congrats on the year!

Congrats on a year. Keep up the good work.

Congrats on 1 year. Always look forward to your column.