A couple of times a year I like to take photos of my bonsai plants so I can keep a running record of how they change over time. Spring is usually one of the times I like to record. It's pretty early spring here in southeast Texas. We're starting to see days in the 70s but with some nights in the 40s. 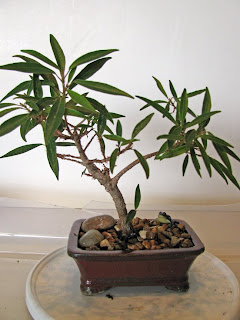 You may recognize this from my banner. I acquired this as a 'starter bonsai' from a local nursery in February 2005, so it's one of my oldest plants. It is an indoor plant and survived the indoor dryness pretty well this year. For some reason, it's got a sticky residue on the leaves and branches. After the photo I cut off most of the leaves and branches with the goo. It will look even better when it grows back. 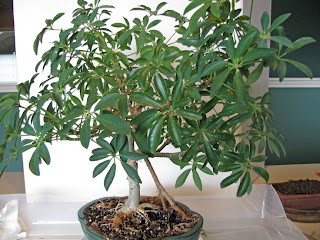 This is my oldest plant. It was a Christmas gift from my wife and daughter in 2004. It too is an indoor plant. This is a very hearty plant and has never given me any trouble. It's 16" tall and requires constant trimming. It is starting to get root bound so I will re-pot it this year. I'm nervous about that but it's going to have to be done. 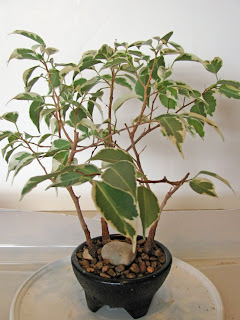 I bought a pot of these at Home Depot in Spring 2005. The pot had 7 plants in it. 4 of them went into this little pot, the other three went into a bigger pot. I've just let the others grow and they are now about 2 feet tall, while these 4 are about 9" tall. I learned much too late that planting an even number of plants is considered to be unlucky but these have grown very well for me. Another indoor plant that did well over the winter. The problem with indoor plants in the winter is that if you don't keep them well watered, they can dry out. This one and the willow both lost all their leaves after the previous winter. 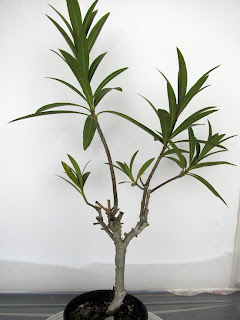 This is an experiment. I have no idea if oleander make good bonsai or not. Oleander grow fast so I thought it was worth a shot. It's been in the little pot since July 2006 and is an outdoor plant. Oleander are evergreen here in the winter. It's about 15" tall. It has not gotten any flowers since I potted it. I trimmed it back so it will get new growth. 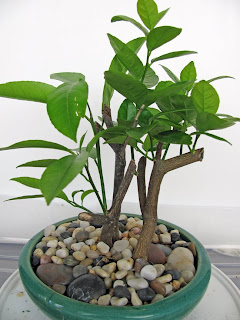 This was originally a Father's Day gift from my oldest son's girlfriend (now wife) in 2003. Last summer I decided to turn it into a bonsai. Citrus tress do well as bonsai. You can see the bonsai process for this tree here. It lives outside and grew well over the winter. We did not get a frost this past winter, so it stayed evergreen. I'll be happy if it gets fruit this year but I don't expect it. 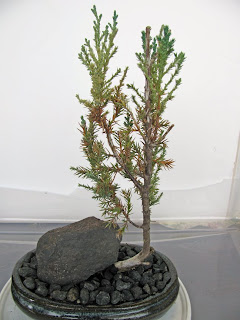 This started life as a 2 1/2 foot high bush I bought at Home Depot. It's about 12" high now. I potted it in March 2007. I picked this particular bush because it has that big bend near the roots. I designed it so it looks like its growing out from under a big rock. The summer of 2007 was cruel to this plant as I couldn't seem to keep it watered enough. You can still see some of the brown needles as a result. But last year it rebounded well and has lots of new growth. It also lives outside. This one is tough to work on. Those needles are sharp! 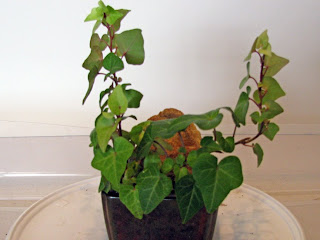 Another experiment. I saw an ivy bonsai in a book. We've got a prolific ivy plant on the kitchen windowsill so I took some cuttings. The pot is small, about 2 " square and a piece of quartz takes up most of the dirt surface. It was planted in January 2007. I trimmed it back after the photo. I'm trying to encourage the stem to get thick and woody like the one I saw in the book.

Last spring I bought a Japanese Maple tree to bonsai. I showed the process here. I didn't take a picture because it died over the winter. I left it inside which I think was a mistake. Hopefully I can find another tree this year to try again. 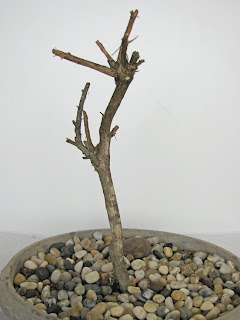 It doesn't look like much but it's alive. It is too early yet for this to bud. This is kept outdoors. I planted it in the summer of 2005. The crepe myrtles around here don't normally show signs of life until mid-March. I am planning to re-pot this as well. Unlike the umbrella tree, I've got this in too big a pot. This grew very well last summer but never got any flowers. More fertilizer this year, I think. 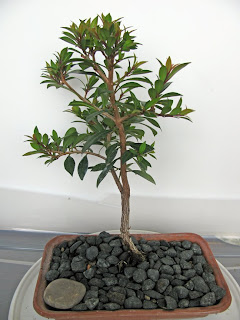 I acquired this already potted as a bonsai last summer from a bonsai dealer. It lives outside and is evergreen. It grew very well last summer. It is supposed to bloom in the spring so I'm hopeful. It's about 10" tall. 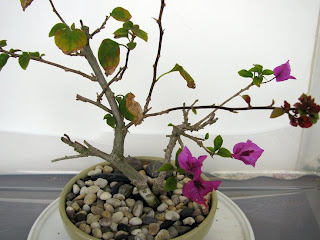 Another southern plant. I bought this as a 5' high vine on a trellis in a 2 gallon pot in July 2006. It's about 9" tall now. I learned something new about this plant recently. It has gotten many red flowers on it (you can see some at the end of the long branch on the right). If you look close you can see a main trunk going to the left, and a smaller trunk going to the right. This trunk now has light purple flowers on it. I believe I have two different plants in the pot. The leaves don't look too good as it isn't warm enough here in the winter for it to stay evergreen. I cut them off. 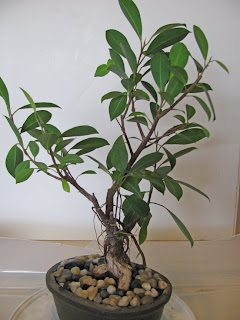 I bought this in February 2005 as a bonsai plant from Home Depot. It was a bit of a rescue mission as the pot it was in was badly cracked. I had it in a regular clay pot for awhile but moved it to a real bonsai pot last summer. I have pretty much given up hope on trying to shape this into anything as it grows very fast. It normally stays inside but last summer I put all the plants outside while we were away for a week so a neighbor could take care of them. I left them outside for about a month total. This developed a lot of aerial roots during that time. I may move back it outside when it gets warmer. 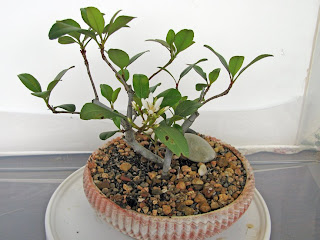 My very first attempt at making a bonsai in February 2005. I originally kept this inside but it never got any flowers. I put it outside last summer. It is an evergreen bush and did very well, and now it has flowers. I am thinking of transplanting this into a real bonsai pot soon. It's currently in a shallow clay pot.
Posted by capewood at 9:24 AM