First look by me anyway. Other bloggers have reported sightings at Target so I stopped in there this afternoon. They were selling loose 12-card packs for $1.99. I bought 5. I also bought 3 packs of Topps American Heritage. I'll post something on those later.

I'm going to feature 5 cards from the first pack I opened. First of all, I like the design right out of the pack. Last's year's design had to grow on me. 2009 has a clean design which is a clear break from the past several years. The photograph is large and the card is not cluttered with stuff. Most of the cards I pulled have decent photos. The backs are also different. In the five packs I pulled three Phillies and no Astros. 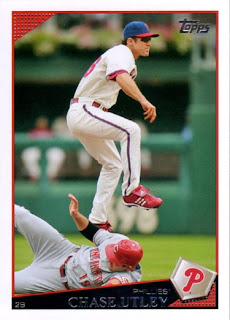 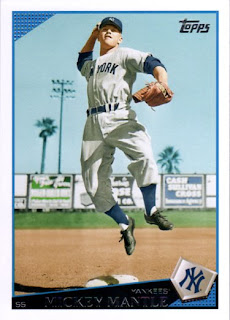 There appears to be one insert card per pack. I got two Turkey Reds. These are pretty much identical to the Topps Turkey Red sets. 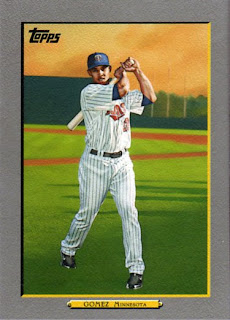 There was also one ToppsTown card per pack which counted as one of the 12 cards. 4 of the cards I got had gray backgrounds like this Pujols. The other had a gold colored background. A parallel version? 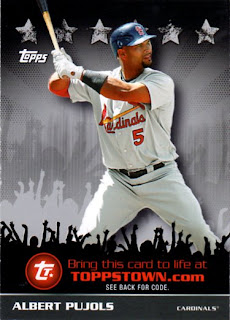 The creepy looking guy on this Topps Legends of the Game insert card is Babe Ruth. I got two of these, the other card features Therman Munson. Are they all going to be Yankees? Too small of a sample to tell at this point. 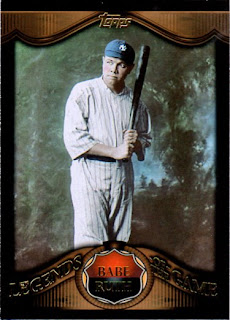 The other insert card I got was a Topps Gold Border of Zack Greinke. Numbered to 2009, of course.

And if you didn't get enough Topps Of The Class cards with David Wright last year, rest assured, they're back this year.
Posted by capewood at 8:56 PM