Fellow blogger and Facebook friend Baseball Dad, saw a comment I made on Facebook a few weeks ago that I wished I owned a Jeanmar Gomez Phillies card. Gomez, at the time had 14 saves and led the NL in saves. Mr. Baseball Dad (known as Jack to his friends) said he'd send me one. I got a nice package of Phillies cards from him the other day. Not only did he send me the Gomez Topps Heritage card but a few other items. As much as I liked getting the Gomez card, this was my favorite thing in the envelope, a Mike Schmidt card I didn't have. 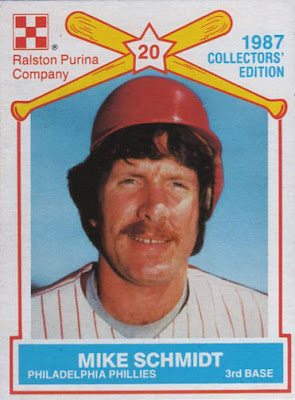 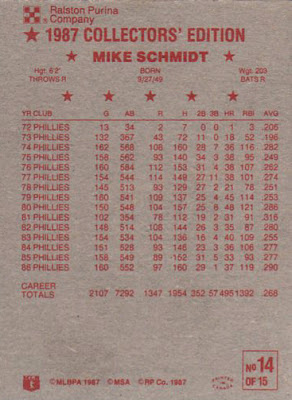 According to tradingcarddb.com, there are 81 Mike Schmidt trading cards or other items (like coins or disks) available. from 1987. 81! Well, now I have 28. Thanks Jack!

Here are a few other Mike Schmidt odd-ball cards from 1987. 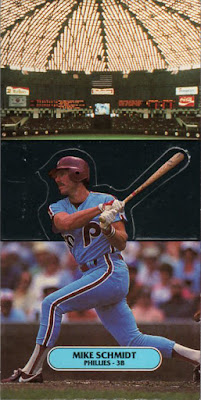 These came with packs of Donruss All-Star cards. 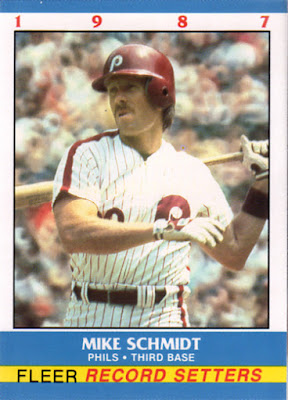 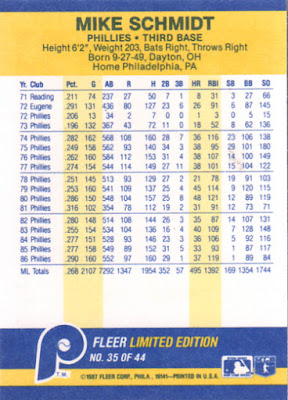 This was one of several 44-card Fleer sets produced in 1987 that were available at drug and department stores. They came in a box like a box of playing cards. This set was available only at Eckerd Drug Stores. I found a complete boxed set at a card store in 2009 for 2 bucks. 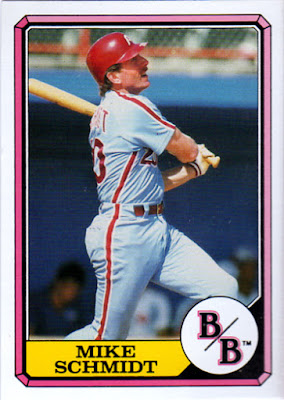 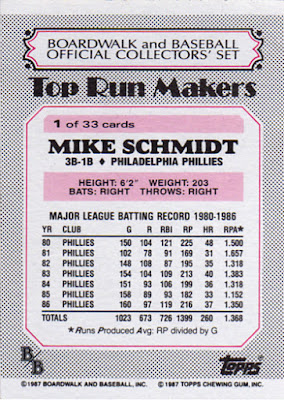 These cards were produced for the opening of an amusement park in Florida called “Boardwalk and Baseball” as a 33-card boxed set. I got this one in a trade with a fellow blogger, Cardboard Junkie. 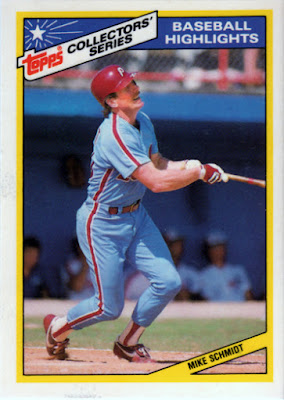 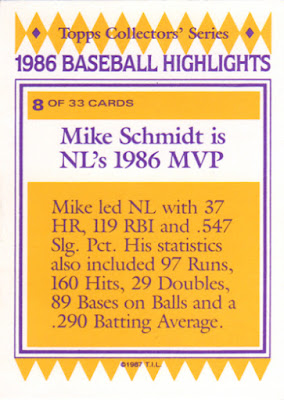 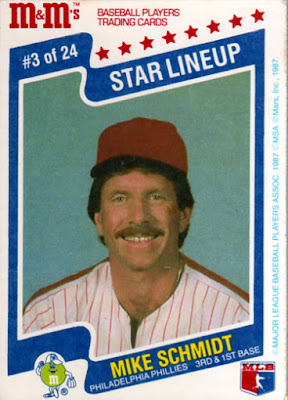 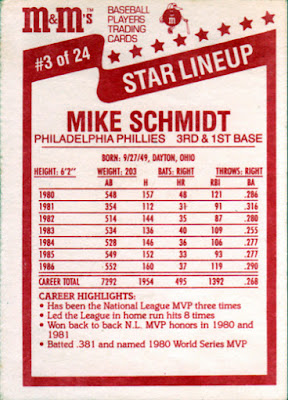 You've probably noticed that some of these cards don't have logos. That's because they didn't have a license from Major League Baseball. This card was produced by Mike Schectner Associates (MSA) who produced many such sets in the 1980s and 1990s. I got this in my 2010 Summer Clearance Trade.

I bought a blaster and a couple of loose packs of Topps Archives. I pulled 3 of the Father-Son cards.  And I like all three of them.

First off we have the Griffeys, Ken and Ken Jr. 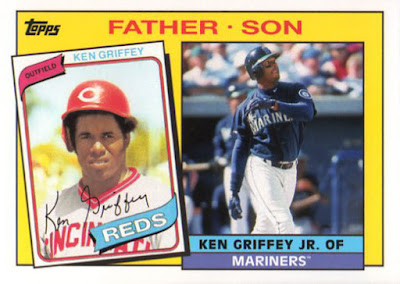 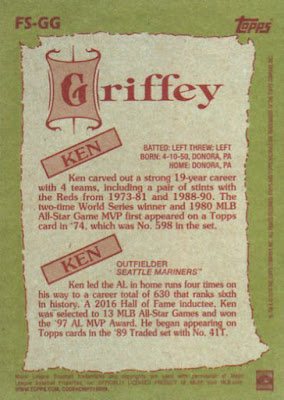 I believe that there are several cards featuring Ken and Ken Jr. This is one of the earlier ones that I have. 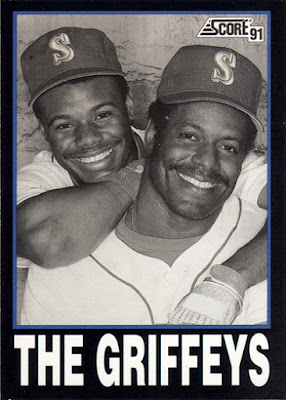 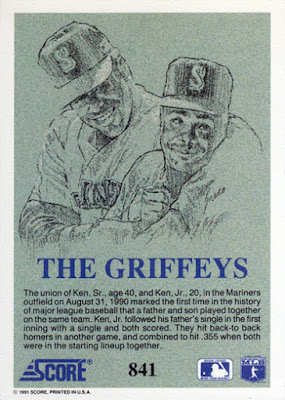 Then there are the Boones, Bob and Bret. 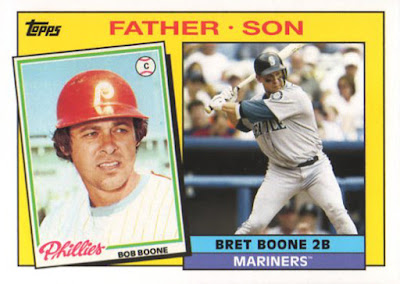 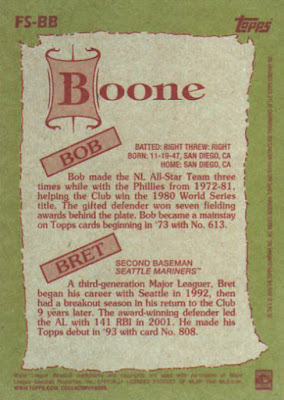 These cards are based on a subset from 1985 Topps. But that wasn't the only year that Topps produced father-son cards. I have this card from 1976 featuring Bob and his dad Ray. 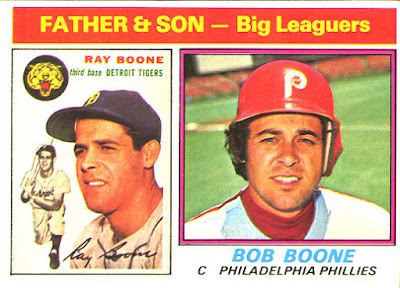 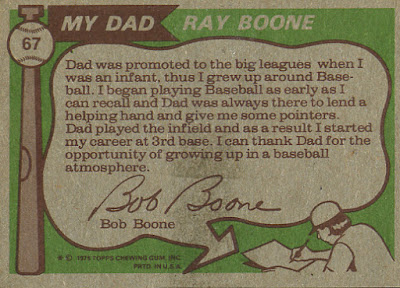 I'm also happy to have then 1978 Bob Boon card used in the Topps Archives card. 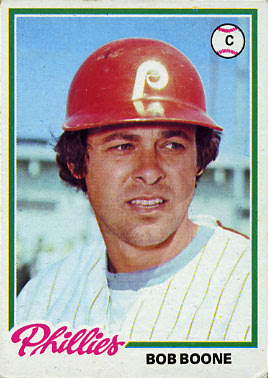 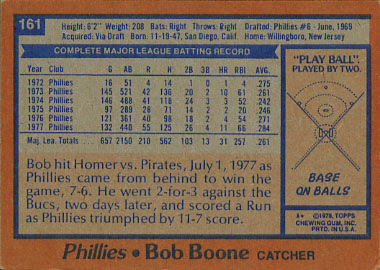 Finally there are the Franconas, Tito and Terry. 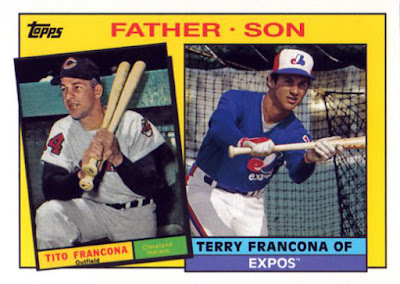 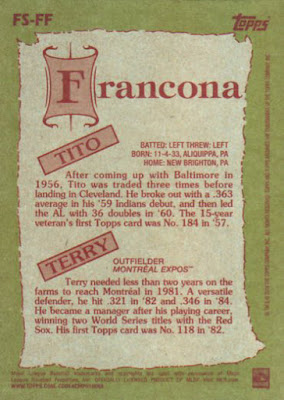 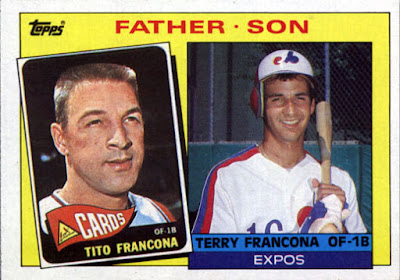 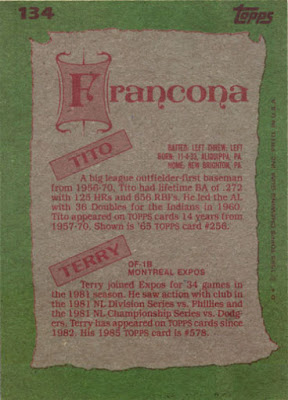 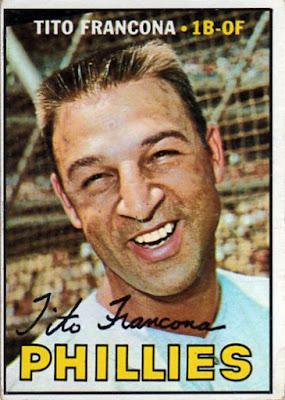 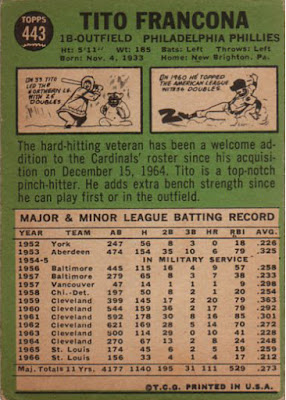 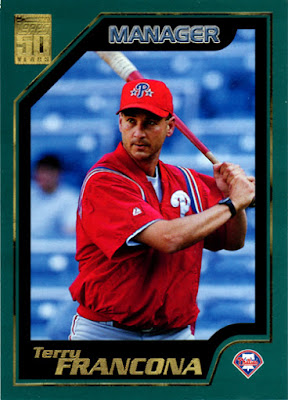 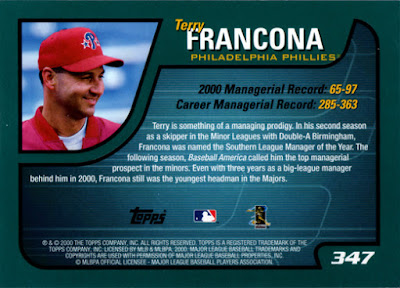 Posted by capewood at 5:19 PM No comments: 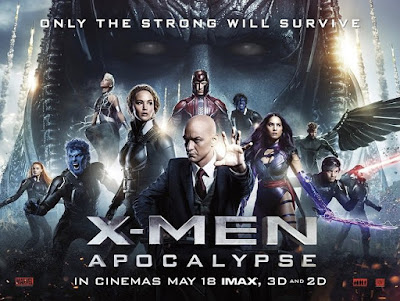 This movie is about Egyptians; crumbling pyramids; people running in panic; a guy who shoots red destruction-beams from his eyes; a guy, with a long pointed tail, who can disappear in a puff of smoke; a woman who is sometimes normal looking, sometimes naked and blue with scales and sometimes blue with scales but wearing a flight suit; another woman who can shoot lightening bolts from her fingers; an ancient guy (who is apparently Apocalypse) who can do anything he wants but wants more power and also wants to destroy the world so that whoever survives can worship him; another guy who hangs in the air while spectacular special effects whirl around him; and how Professor Xavier loses his hair. Whew.

This is the third movie in the second series of X-Men movies. As one of the characters (Jean Gray played by Sansa Stark from "Game of Thrones") says, "The third movie of a franchise is always the worst".

Oh, and Wolverine makes a brief appearance, having apparently been captured by the US military. After being rescued by Jean Gray, Cyclops (who, by the way, actually has two eyes) and Night Crawler (the guy with the pointed tail) runs off into the woods without saying a word. I guess this was to remind you of the character since Fox is planning a new Wolverine movie.

Would it be a spoiler if I told you that Apocalypse is defeated?  The last time he was beaten it was by Egyptians with spears. This time he's up against The Beast, Cyclops, Dr. Xavier, Jean Gray (why doesn't she have a snappy superhero name?), Night Crawler,  Quicksilver, and other oddly named and powerful young adults. And good always trumps evil.

The movie is also about the seemingly endless conflict between Dr. Xavier and Magneto. I don't know if I can stand hearing the doc comment another time on his knowing that Magneto has some good in him. If it wasn't clear in the other 5 movies, it's apparent now that Magneto has no good in him. Just moments when he thinks to himself, "OK, I guess this is a bit much, even for me". In this movie, Magneto is directly responsible for vast destruction around the world and the probable death of millions of people. Is there any coming back from that? Apparently because cock-eyed optimist Dr. Xavier once again says "I knew that there was some good in you".

We've seen just about every other Marvel movie so we figured we had to see this one as well. There was some good points (some humor and Olivia Munn's costume) and of, course, the special effects were spectacular (but that's expected nowadays), but I would rank this pretty far down in the list of my favorite Marvel movies.