It's a Phillies fan's favorite time of the year. Here are the match-ups for the NLDS series against the Cardinals. 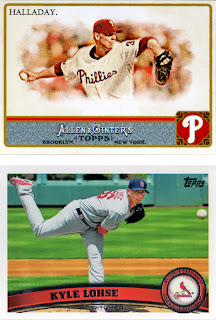 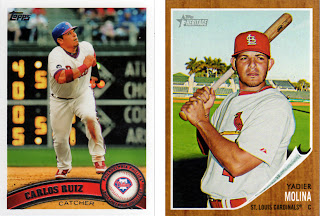 Ryan has 7 home runs and 27 RBIs in postseason while Albert (does anyone call him Al) has 12 ans 36. 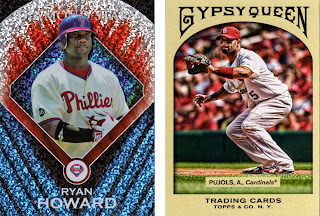 Chase has a lot of postseason experience and hit 5 home runs in the 2009 World Series. Skip has only 2 postseason games under his belt. 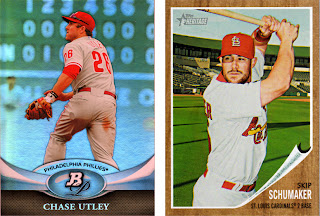 Jimmy only has a combined .226 BA in 41 postseason games, but has 15 RBIs. Ryan has much less postseason experience. 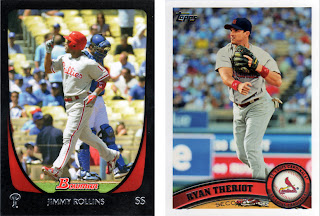 Placido has a combined .273 postseason average with 13 RBI. I'm guessing that the right handed David will get the start against Halladay. He has no post season experience at all. He finished the 2011 season with a .297 average however. 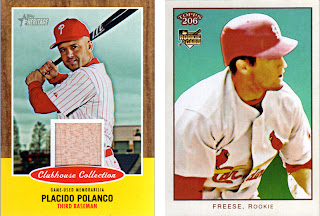 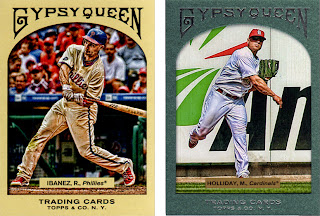 Shane has scored 23 runs in 41 postseason games. Jon has no postseason experience but batted .297 this season. 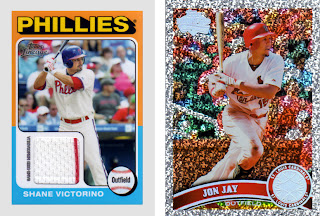 Hunter came to the Phillies from the woe-begone Astros in late July and had an immediate impact. He drove in the winning run in the Phillies franchise setting 102nd win. This will be his first postseason series. Berkman, another former Astro, may be the comeback player of the year. He hit .301 for the Cards with 31 home runs. He is also a .320 hitter in postseason play with 32 RBIs. 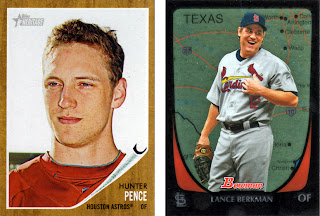 You've seen these in the big box stores. 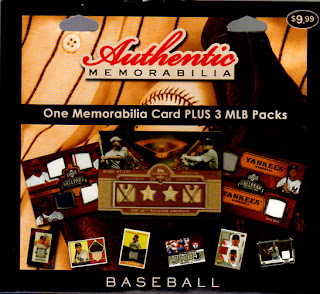 Sometimes I just have to buy one. First, the memorabilia card. 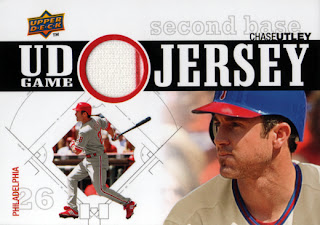 I'm not a big fan of the 2010 Upper Deck jersey cards but this one features Chase Utley and has a stripe so I already feel like I got my money's worth.

There were 8 base cards in the Fleer pack with two inserts. I had most of the cards already but I didn't have this one. 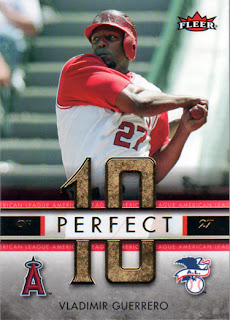 I'm happy with this since I collect Vlad.

The Topps pack was pretty much a waste of time. I did get this card which I didn't have. 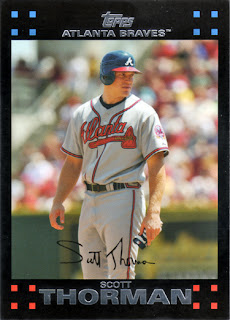 Thorman was the Braves #1 draft pick in 2000 and I have his 2000 Bowman Draft Picks Autograph card, which, the last time I looked (several years ago) was booking at $80. Thorman hasn't played a game at the major league level since 2007 and has been on 5 different teams since then. If anyone wants to offer me $80 for the autograph card it's yours.

Then there was this. 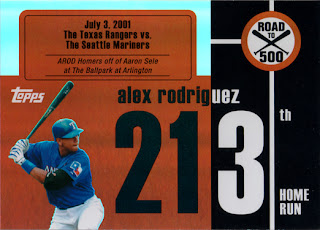 A-Rod had something like 464 home runs heading into the 2007 season. That means there were 464 of these cards, one for each home run. There were only a handful of different photos used. I already had 214 and 215 which have the same photo as 213. Is this an insert set that anyone seriously chased?

I saved the 2nd best for last. This came out of the Upper Deck X pack. 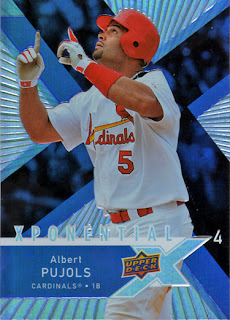 I don't care all that much for Topps Lineage but I gotta have my Phillies. Luckily there is eBay. 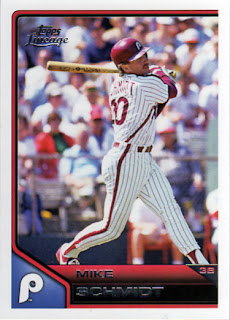 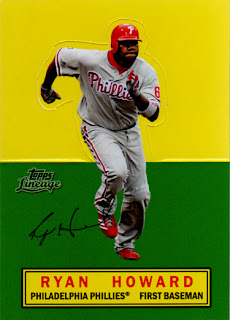 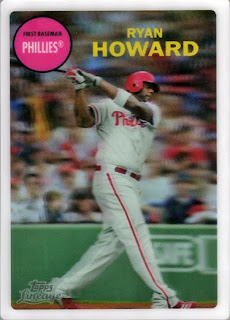 For a 3-D card it scanned nicely. I hadn't seen one of these before. The card's 3-D effect is pretty good. 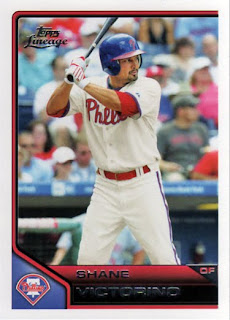 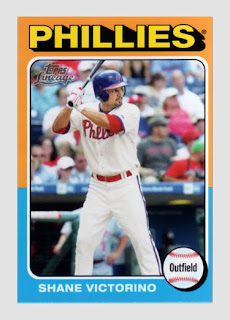 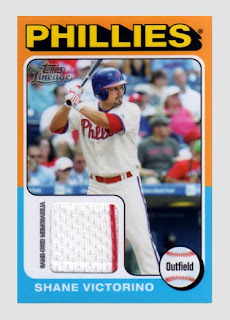 Complete with a red stripe!

Posted by capewood at 3:41 PM No comments:

I had bought a blaster box of this product in 2009 and really liked it. I went back for more but never saw another box of it. I forgot all about it last year. This year I saw it mentioned on Baseballcardpedia.com. I've not seen it in the stores. I tried to buy a hobby box on eBay but gave up when the bidding got over $80 (the box sold for $108!). But I did find these Phillies player cards. 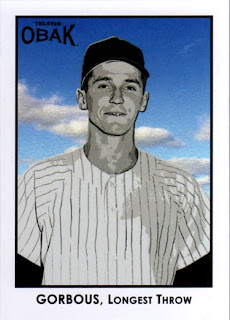 Glen only played 3 years (most of it with the Phillies) but according to the back of the card (and Wikipedia), he holds the record for the longest throw, 445 feet and 10 inches. Neither the card nor Wikipedia give any details on this. It's hard to imagine. Connie Mack Stadium, where the Phillies played, was only 405 feet in the deep right field corner (Gorbous was a right fielder), so it must have happened some where else. 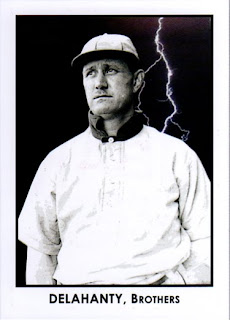 Big Ed played 17 years (1888-1903), 14 of them with the Phillies. His best season was in 1899 when he had 238 hits, 55 doubles, 137 RBIs, and batted .410. He was elected into the Hall of Fame in 1945 by the Old Timers Committee. Ed came to a sad end. He was kicked off a train in up-state New York for excessive drinking. He ended up crossing the International Bridge in Niagara Falls and either fell off, was pushed off or jumped. Here's the Wikipedia link to the story. Ed had 4 brothers who also played major league ball: Frank, Jim, Joe and Tom. 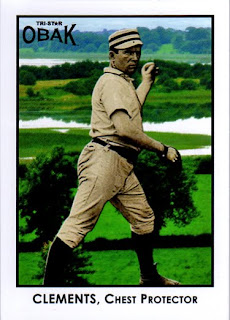 Clements was a left-handed catcher who spent 17 years in the majors, 14 of them with the Phillies. According to Wikipedia, he is the last left-handed catcher to play on a regular basis. He retired in 1900, having caught 1,073 games, 4 times as many as the next highest left hander. He is also credited as the first catcher to wear a chest protector. 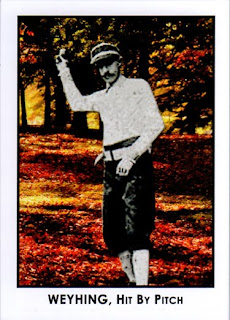 Gus had a 15 year career, playing for the Phillies from 1892 into 1895. Even after all this time he still holds the record for most hitters hit by a pitch, 277. According to Wikipedia, he was accused of stealing a pigeon in his home town of Louisville prior to the 1892 season but apparently didn't go to jail. He won 35 games for the Phillies that year. Speaking of Wikipedia, here's the source of the Obak card on Weying's Wikipedia page.

I imagine there aren't a lot of photos of Gus laying around. Gus had a few colorful nicknames: Cannonball, Rubber Arm Gun or Rubber-Winged Gus. It probably hurt getting hit by one of his pitches. 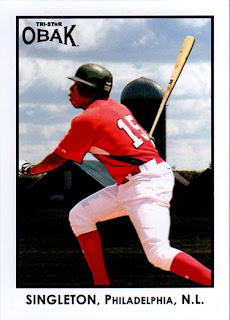 The only current-day player of the bunch. Singleton was a 1st baseman in the Phillies minor leagues. Not a good place to be, playing behind Ryan Howard. He was traded to the Astros in the Hunter Pence deal. Being with the Astros may not be a good place to be either, but perhaps in a few years a resurgent Astros team will feature him at first.
Posted by capewood at 11:12 AM 2 comments: