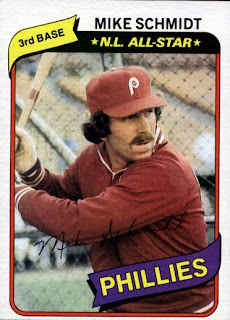 By any objective measure, 1980 was the best year of Mike's great career. Let's look at the stats: 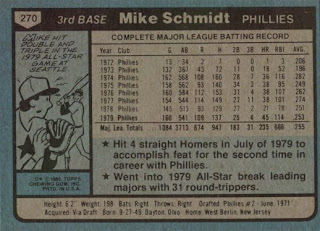 The Phillies also had a great year, powered along by Schmidt. They finished the season 91-71. They took 2 out of 3 games in Montreal to edge the Expos for 1st place in the NL East by 1 game.

They beat the Royals, led by the great George Brett 4-2 to win the World Series, their first World Series title in team history.
Posted by capewood at 9:11 AM

Schmidt had another great year in 81 that sometimes is dismissed because of the strike.

If you project out his numbers over a full season, they would have been huge.