We were out grocery shopping at one of the many fine WalMart stores in our area last weekend. I can't go in there without looking for baseball cards. There on the shelf were two blaster boxes of 2009 Upper Deck, so I bought them both. I think I like them better than last year's cards. The main problem I had last year was that it was almost impossible to read the text on the front of the card. 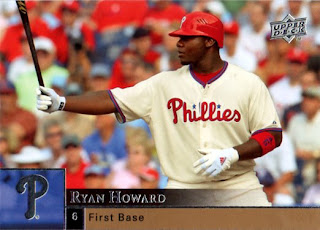 There isn't any team color cordination on the front of the card. The Phillies logo is in a blue box. On Dodgers cards, the logo is in a red box. Seems like it should be the other way around. 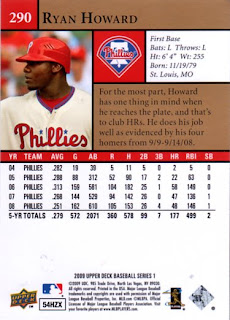 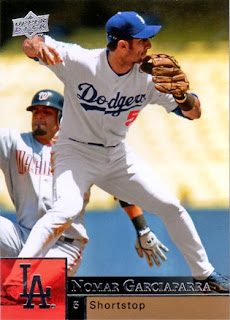 Here's a Dodger card so you can see the red background for the logo. 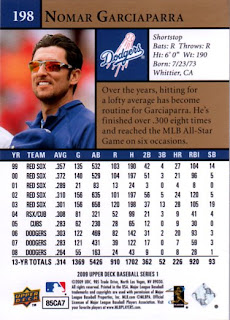 But the back has blue. But wait, on this card, the back photo is different. What's up? I noticed this card in an early pack I opened. In all the base cards I got in the two boxes, all but 6 cards had the same photo as the front. Why? 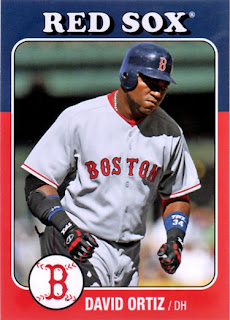 This Ortiz card is a 1975 O-Pee-Chee insert. Hey, it looks very much like a 1975 Topps card! I know that O-Pee-Chee produced Topps baseball cards in Canada. I guess Upper Deck had to changed the design a bit so Topps wouldn't sue them. I think Topps should sue them anyway. 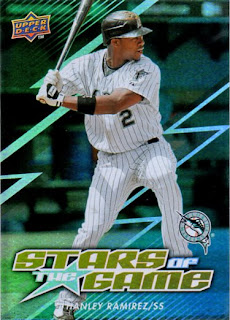 This shiny Hanley Ramirez card is a Stars of the Game insert. Very Topps Chrome Refractor like. 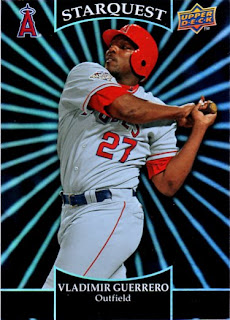 OMG, Star Quest is back. This year, in addition to being labeled to identify their scarcity, they are also color coded. They have Silver Common, Purple Common, Blue Uncommon, Gold Rare, Emerald Super Rare and Black Ultra Rare. Last year, I think there was one of these in every pack. I only found 6 in the 2 boxes, 4 Blues, 1 Gold and this Black Ultra Rare. Just in case you never got one you'll know what you're missing. I'll tell you that the Blue Uncommons don't look in the least way blue to me. The Ultra Rare is refractive. 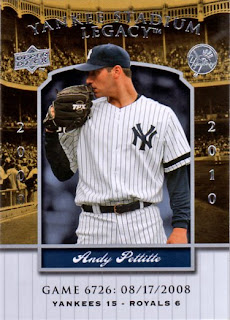 And Yankee Stadium Legacy is back, only updated for last season. The cards don't look any different except they have higher numbers. I didn't pay close attention to these cards last year and only posted this card to ask a question. According to the back of the card, Mike Mussina won this game. Why is Andy Pettitte shown on the front? Is there any real reason that Upper Deck won't update this set every year? 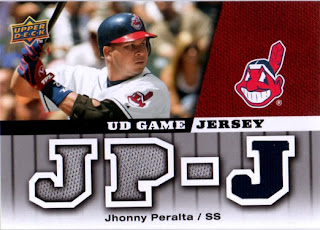 The box said one jersey card included. Here's what I got in the first box. 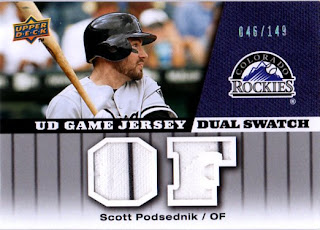 And this is what I got in the second box, a dual jersey with stripes and stitches. I like that I got a different kind of jersey care in each box. I'd have liked it even better if I'd gotten a player I cared about. I'll be happy to trade either or both of these for either Phillies or Astros. 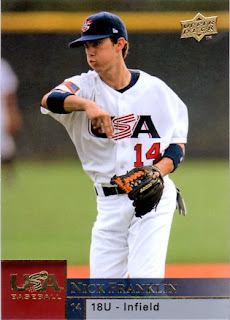 A repeat of last year's USA Baseball. The cards have the same design as the regular set only with gold foil logos. 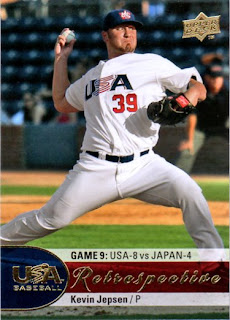 This Retrospective (Upper Deck's current favorite word) card is similar to the USA Baseball Highlights from last year. But this year, they remembered to put the player's name on the card. 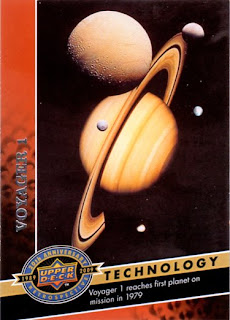 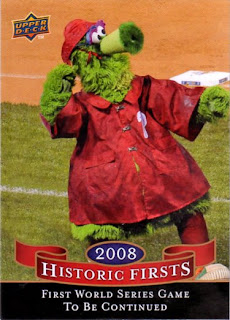 And now for something completely different, the Phillie Phanatic. A world shaking historic first. The other one of these cards was some unimportant thing about the first privately financed space launch. Yawn.
Posted by capewood at 9:55 AM

I just noticed this, but why waste all that space on the bottom of the base cards to identify the players position. In fact I rarely recall any card not using the abbreviations (C, 1B, SS etc) for position. seems like a tremendous waste of space in our text msg wrld.

I still haven't seen UD live around here but I'm very interested in the Jhonny P. card.When I get home from work tonight I'll see what I can find to offer you !

Cliff, do you think the '09 UD is, to repeat the word you used about Leaf in the post above, uninspired?

Well, I said I like the set but I'm not wild about it. So, uninspired? Yea.