When Dan at the Saints of the Cheap Seats blog asked me to participate in a group break on his blog, I wasn't sure if I wanted to. But for only $20 and the chance to get some product marketed to people way above my pay grade, I jumped in. The break was of a case of 2007 Ultimate Collection. $20 got you your choice of teams. Since the Phillies were already taken, I took the Astros. I only ended up with 2 cards but I am well pleased.

First off is this Ultimate Collection Ultimate Write of Passage autograph card of Hunter Pence. Pence is a pretty exciting player and 2007 was his rookie year. It's a sticker auto but I love it anyway. Beckett lists this card at $60. I looked at similar high end autographed cards of Pence on eBay and you might get $60 for this card. 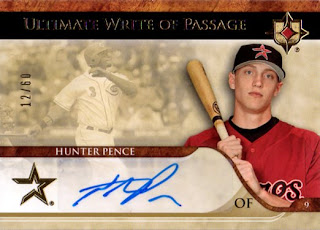 This is the second card I got. 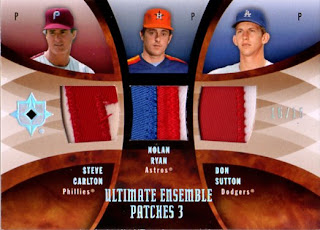 A Ultimate Collection Ultimate Ensemble Triple Patches featuring Steve Carlton, Nolan Ryan and Don Sutton. If you've got nothing better to do you can see the first part of the video break here. This was the last card pulled in the video. Since there are 3 teams represented on this card, Dan did some random selection process which awarded the card to me. The card is numbered 15/15. Beckett doesn't list these. I couldn't find anything comparable on eBay. Whatever it's worth, between this and the Pence card I got my $20 worth.

Today was a fabulous mail day. In addition to this I received my prize from Patricia and Lucy for a contest they ran a few weeks ago. Also, a big package of Phillies from Max and another big package of Phillies from Phil. I've made some trades with these guys and they've overwhelmed me with their generosity. I've got enough material for several new posts.
Posted by capewood at 8:36 AM