Song of the Week - Ambulance Blues by Neil Young

This song is from Neil's 1974 album On The Beach. I haven't heard anything from this in ages because I didn't have it on CD. Yesterday I finally downloaded the album from iTunes. Man, have I missed this old record.

Here's a performance from 2008. Neil's lyrics can often be opaque. This song had a lot of references to current events in 1974. I'll leave it to you, the listener, to figure them out.

Back in the old folky days
The air was magic when we played.
The riverboat was rockin' in the rain
Midnight was the time for the raid.

Oh, Isabela, proud Isabela,
They tore you down and plowed you under.
You're only real with your make-up on
How could I see you and stay too long?

All along the Navajo Trail,
Burn-outs stub their toes on garbage pails.
Waitresses are cryin' in the rain
Will their boyfriends pass this way again?

Oh, Mother Goose, she's on the skids
Sure ain't happy, neither are the kids.
She needs someone that she can scream at
And I'm such a heel for makin' her feel so bad.

I guess I'll call it sickness gone
It's hard to say the meaning of this song.
An ambulance can only go so fast
It's easy to get buried in the past
When you try to make a good thing last.

I saw today in the entertainment section
There's room at the top for private detection.
To Mom and Dad this just doesn't matter,
But it's either that or pay off the kidnapper.

So all you critics sit alone
You're no better than me for what you've shown.
With your stomach pump and your hook and ladder dreams
We could get together for some scenes.

I never knew a man could tell so many lies
He had a different story for every set of eyes.
How can he remember who he's talkin' to?
'Cause I know it ain't me, and I hope it isn't you.

Well, I'm up in T.O. keepin' jive alive,
And out on the corner it's half past five.
But the subways are empty
And so are the cafes.

Except for the Farmer's Market
And I still can hear him say:
You're all just pissin' in the wind
You don't know it but you are.

And there ain't nothin' like a friend
Who can tell you you're just pissin' in the wind.

I never knew a man could tell so many lies
He had a different story for every set of eyes
How can he remember who he's talking to?
Cause I know it ain't me, and hope it isn't you.
Posted by capewood at 11:47 AM 1 comment:

2008 Topps had white borders with silver foil for the player name and their logo. 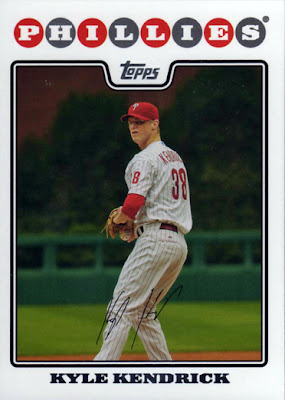 You remember this set. Not a lot of people liked it due to the cartoon-like team name lettering. As I remember people didn't much like the tab at the top of the photo either.

As I may have mentioned, I'm in the process of putting away 2-3 years worth of cards and while I'm doing it I'm checking the Phillies cards I have against my database and correcting counts. I had listed two of these Kendrick cards. On closer inspection, I realized that one of them was actually the Gold Foil variation. 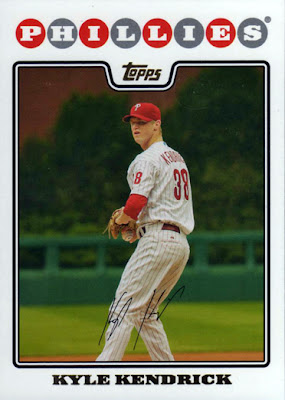 If you use your imagination you can see the difference between the cards. According to baseballcardpedia.com, the Gold Foil cards were available 1 in 2 packs in both retail and hobby.  I didn't see them in anything like at profusion. Maybe I have more but it is very difficult, even in person, to see the difference between the silver and gold foil.

This isn't really that big of a deal but I was watching the Phillies play the Braves when I pulled up these cards. Kyle Kendrick was pitching when I made the discovery. During the summer when I'm mostly working on my collection I am usually watching or listening to either a Phillies or Astros game.  I can't tell you how many times its happened that I'd be holding a card and that player would come into the game. And not just Phillies or Astros, often it will be a player on the other team.

And just as I was ready to hit the post button, Chase Utley hit a home run to put the Phillies up over the Braves, 6-2, in the bottom of the eighth.
Posted by capewood at 8:30 PM No comments:

I put up a post like this before concerning 2005 Red Sox and Indians team cards. I'm in the process of reorganizing my Phillies cards and noticed a similar thing. Here's the Phillies team card from 2005 Topps. 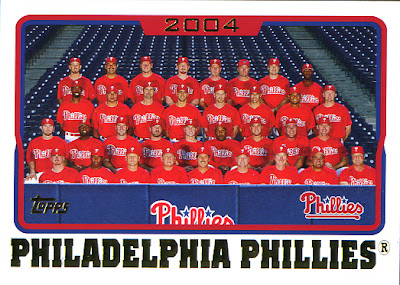 34 players and coaches are in the photo. Here's the team photo from 2005 Topps Heritage. 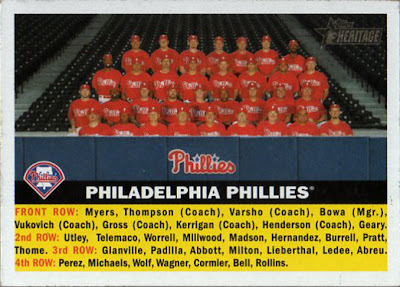 As near as I can tell (you may disagree) the rest of the picture is identical in the two cards. So what's going on here? Topps having fun with photoshop (to what purpose?) or the Phillies messing around during team photo day?

Since I've seen this on 3 different team card pairs, I'm inclined to think it's Topps.
Posted by capewood at 1:40 PM 9 comments:

Song of the Week - My Love Won't Last by Two Gallants

Blogging has been sporadic lately, I hope to get back on a regular schedule next week.

Here's a recent podcast I got from KEXP radio. I don't know anything about these guys beyond what I read in their Wikipedia entry here. But I like this song.

I was in WalMart the other day and stopped at the baseball card aisle to get a rack pack of Topps Chrome (after the all-purple blaster box I bought earlier, I needed some base cards). I saw a box of Triple Play and bought 5 packs at 98 cents each. With 7 cards to a pack, that works out to only 15 cents/card.

Triple Play was a Donruss brand from the mid-1990s that featured colorful graphics and action shots aimed at attracting kids. This reincarnation is certainly bold. 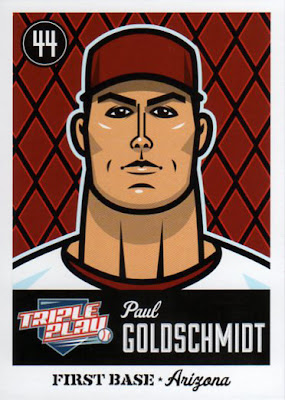 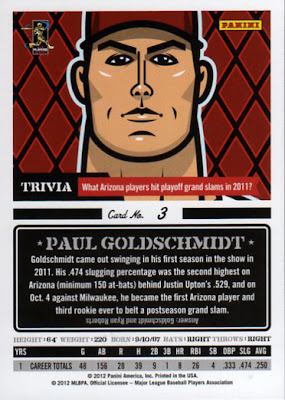 Since Panini doesn't have an MLB license, choosing to go with art work instead of photos makes avoiding logos easy. The art is certainly striking, if a bit in the style of 1930s socialism. Will kids like this stuff? 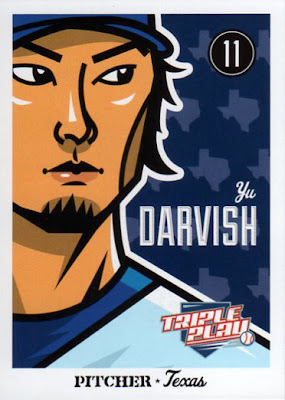 Note there are no rookie card logos. 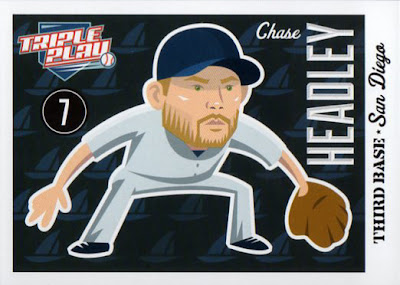 Some cards are horizontal and some feature something other than a head shot, although this Headley card is about as much action as you get. 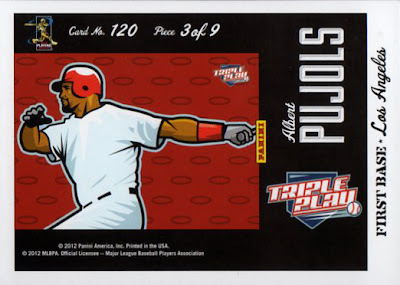 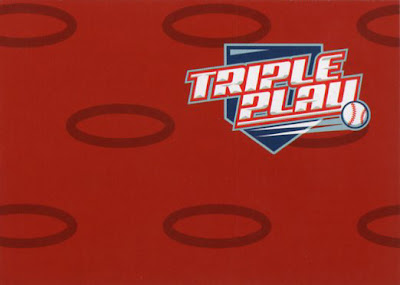 This is the puzzle subset. The front of the card features a smaller version of the player's regular card while the back features 1/9th of the card, 9 of them fit together. There are at least 9 players done like this, so almost a third of the 300 card set the same front in sets of ten. Again, will kids like this? 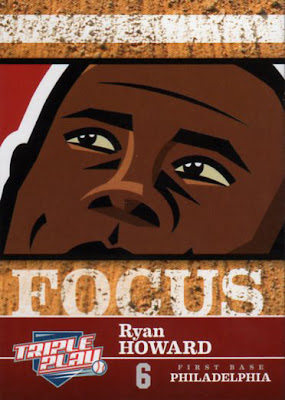 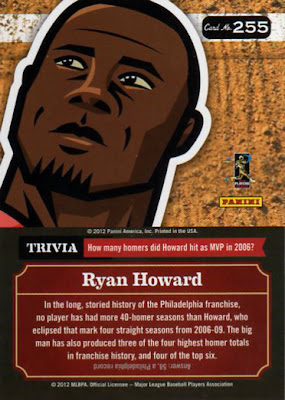 This another subset. The picture is the same used on the player's regular card. I'm not sure what Ryan's focused on. He doesn't have a hat, so maybe his hat fell off while he was chasing a foul ball. This was the only Phillies card I pulled. And of course, there wasn't a single Astro in the packs. 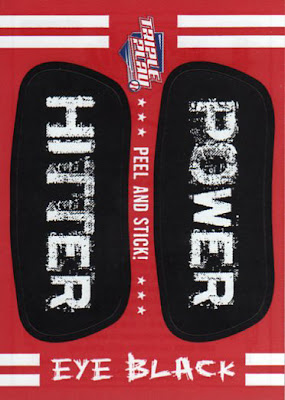 These are stickers. This set has 6 cards, I only pulled one. 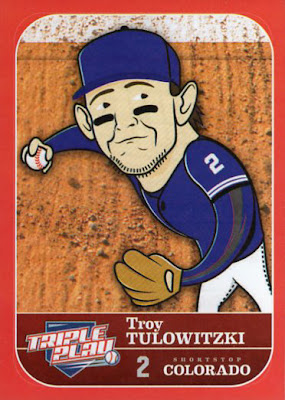 There are 30 of these stickers. I got one in each pack. Some feature players, others feature goofy stuff like this. 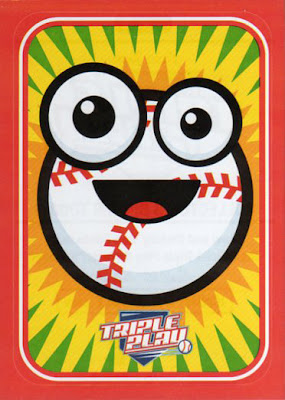 Not for the faint of heart. 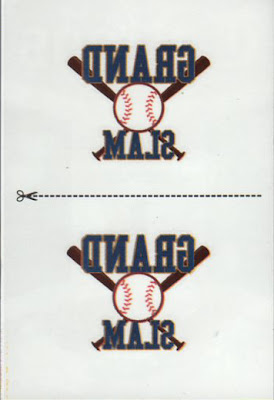 There are 5 of these.

My excess Cardinal cards went to madding at the Cards on Cards blog. Madding is a repeat trade partner and it's always great to kook up with previous traders. Here's some of the good stuff I got. 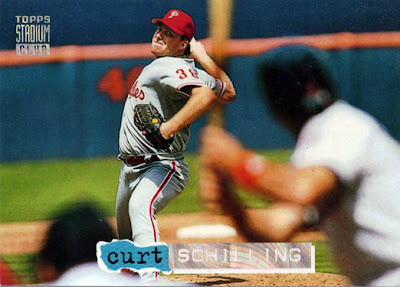 Parallel sets are all the rage but in 1994 the practice was still new. I have all the Phillies from the 1994 Stadium Club base set but not too many of the Golden Rainbow parallel. Madding sent three of them. 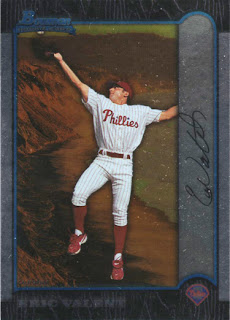 I featured 1999 Eric Valent cards before. Topps used this same photo on their Bowman, Stadium Club and Topps set in 1999. There are still 5 or 6 parallel versions out there I need. 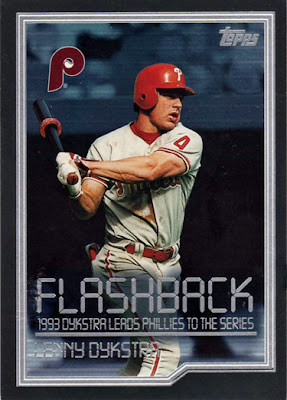 Probably the less said about Lenny Dykstra the better. Anyway, this is one of several Dykstra insert cards published in 2003. 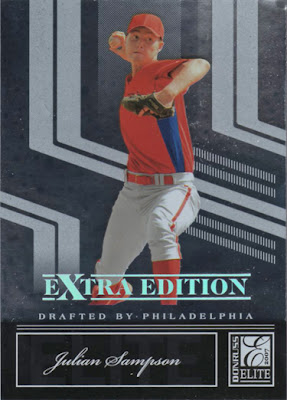 As I mentioned in an earlier post, these are the kinds of cards that a hard to get when you're a team collector. And knowing Donruss, there are probably a dozen parallels to this card. Madding sent two other cards from this set as well. Thanks! 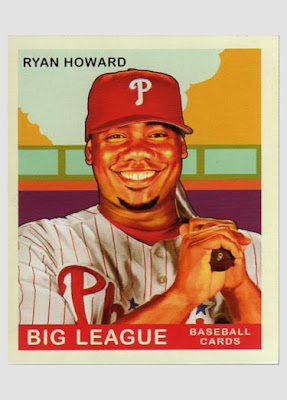 There were two Howard cards in this set, this one and a short-print card. I had the short-print already. 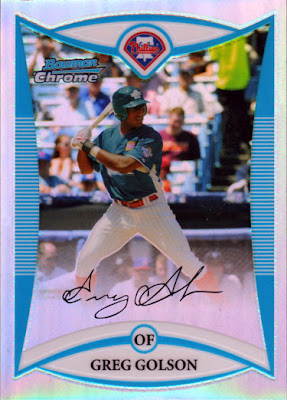 Here's another card that's hard to come by. I generally only buy one blaster of this product and what I get is what I get. I already had the base version but there are several other rarer parallels still out there. 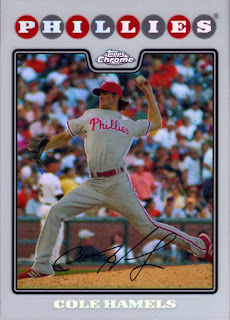 Another card that I had the base version of. Topps Chrome is another product I don't buy much. The 2008 version is very nice. The team and play names pop right out of the card. 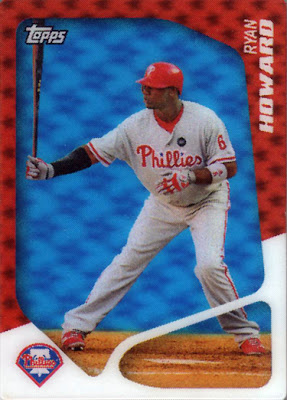 These cards have a great 3D effect and I love 'em.

Song of the Week - Famous Blue Raincoat by Leonard Cohen

I have long been a fan of Leonard Cohen and own almost all of his albums. This is one of my favorite Leonard Cohen songs from his 1971 album Songs of Love and Hate. This performance is from 2010, when Cohen was 74 years old. He is still a powerful performer.