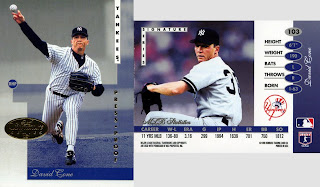 1996 Leaf Signature was the first release to feature an autographed card in every pack. The 4-card packs sold for $9.99. Every 48th pack had all autos. I don't remember seeing this in 1996 and if I did, the price probably put me off. I don't actually own one of the base (non-auto) cards. Shown above is a Gold Press Proof parallel which I acquired on eBay for $3.16 in August 2004. The Gold Press Proofs were inserted 1:12. There was also a Platinum Press Proof inserted in the Extended Set at 1:24. 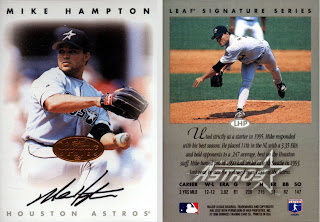 Each pack featured at least 1 autographed card. This is the Bronze level card. 5,000 Bronze cards were signed by each player. Some players are short printed. It looks like most of the big players of the day are short printed (R. Alomar, Boggs, Jeter, Lofton, Molitor, Manny Ramirez, A. Rodriguez, Frant Thomas, and Mo Vaughn). Some players signed some of their cards in different color ink as well. Each player signed a notarized affidavit to guarantee each signature was authentic. I got this Mike Hampton card on eBay for $6.50 in November 2003. 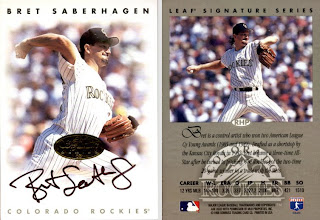 Only 500 Gold Parallel cards are available for each player. I paid $4.37 for the Saberhagen card in November 2003. 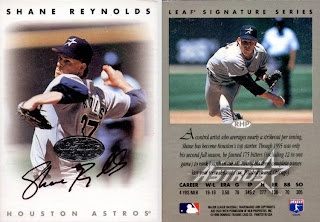 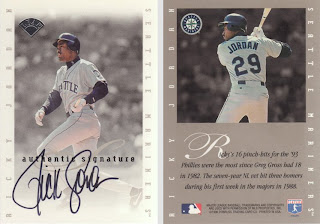 Donruss released a second edition of the set called Extended. The autographed cards have a different design than the original set. Also included in this set were some from the first set which weren't returned in time to be included in the original packs. There were 2 autos per pack in the extended set. There are 5,000 cards per player with some short printed cards as well. There were no parallels of the Extended set. I paid $3.00 for the Ricky Jordan card in November 2003. Jordan had a 7-year career with the Phillies from 1988 to 1994. He was a free agent at the end of the 1994 season and was hoping to get a big contract somewhere. There were several free agents at that time who, due to the strike in 1994, didn't get signed by anyone. He finally signed with the Mariners for the 1996 season but only played 15 games for them and that was it for him. His only other 1996 card is from Fleer Update. 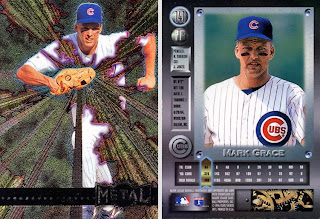 This was the first year for this set which would last through to 2000 (when it was renamed simply Metal). The cards feature textured foil and weird settings designed by comic book illustrators. The 250-card set was available in 8-card packs for $2.49. I always liked these cards although I never bought many of them. This Grace card I got in a pack in 1996. 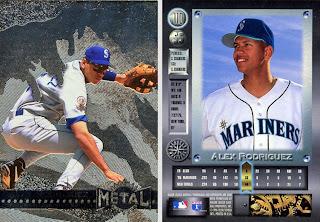 The Platinum version featured just silver foil and were inserted 1 per pack. There was also a Titanium version inserted 1 in 24 packs. I don't currently have any of the Titanium cards but I just bought a Greg Maddux on eBay. I paid $1.16 for the A Rod (doing his Silver Surfer impersonation) card in August 2004. 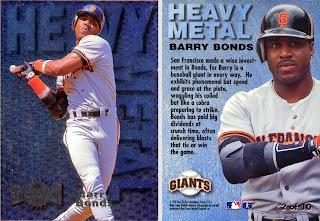 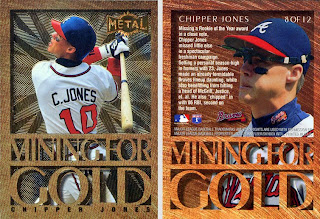 A 12-card set inserted at 1:12 in retail packs. This is a nice looking card. The front features a lot of gold foil. I paid $1.99 for this Chipper card in August 2004. If you've noticed, I made a concerted effort to find these insert sets back in 2004 and was pretty successful. The set features top rookies. 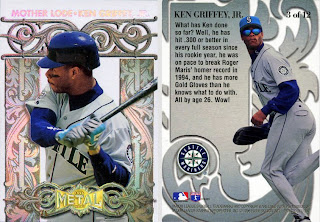 Another 12-card set, inserted at 1:12. None of these inserts were particularly hard to pull. I think this is the nicest of the bunch since I like the refractive foil look. I paid $1.92 in August 2004. 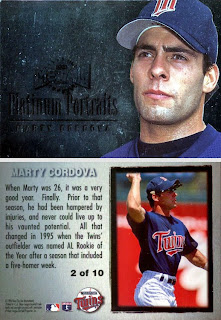 The shiny foil background makes this a tough card to scan. This is a 10-card set, inserted at 1:4. I got this card in a pack in 1996. This set also features rookies and 2nd year players and overlaps a lot of the Mining For Gold set. As soon as I get the Maddox Titanium card, I'll have this set complete.
Posted by capewood at 9:37 AM