Thursday Night at the Movies - The Time Traveler's Wife

We both liked this movie a lot. Although it sounds potentially like a science fiction movie, it really isn't. Sure, Harry, played by Eric Bana, does a lot of time traveling, involuntarily, but the movie is about the people involved and how they deal with the situation. 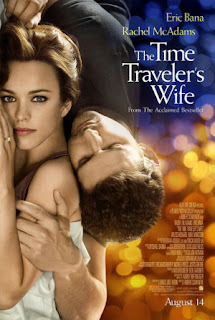 As a science fiction fan and an engineer, I had to put down my wondering about how or why Harry's time traveling was happening. This is never revealed and in the end doesn't matter. Be warned that this is a tear jerker, especially the ending.

Here's what you learn from the trailer. Henry travels through time. With virtually no warning, he will disappear, leaving his clothes behind, and end up in some other time, within his own life time. He is often drawn to a particular field where he meets Clare, for the first time when she is a young girl. She grows up, in love with Henry until she finally meets him for real. He falls in love with her (it was his older self that had met her as a girl) and they marry. He has no control over his traveling, neither when nor where he goes.

This is the third movie we've seen this year with Eric Bana (Henry). He was the vengeful Romulian in Star Trek and the loud talking gross Australian husband of Adam Sandler's old girlfriend in Funny People. These are three very different roles and I'm impressed with Bana's acting. I don't remember him from anything else.

The wife (Clare) is played by Rachel McAdams. She is also new to me but I really loved her in this.