In the mid-1990s it seems that sports phone cards were all the rage. A number of sports card packs had phone card inserts from 1993 through 1997. This first one is from from 1995 Stadium Club. There were 13 of them randomly inserted into Stadium Club packs, celebrating different All-Star Games. I was happy to pull this on from a pack. Happy because it featured a game hosted by the Astros. 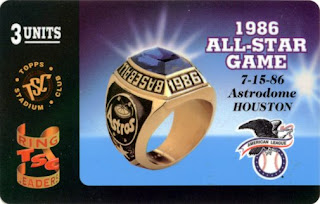 By using the card to make a call, you could be a winner of the entire 40-card Stadium Club Ring Leaders insert set. The way it worked was you dialed 1-800-95-RINGS and entered your card number. If you were a winner you'd be switched to a live operator and told how to claim your prize. If you weren't a winner you could enter in a phone number and get a free 3-minute phone call. Here's what the Ring Leaders cards looked like. 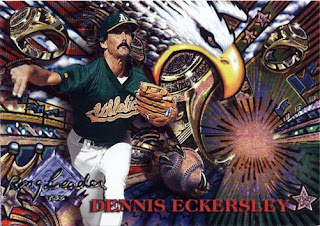 You could also get one of these in a pack at 1:24 odds. That's how I got the Eckersley card. The card is quite extravagant with multi-colored foil printing. For some reason, I never tried to collect my prize.

I just acquired this Nolan Ryan phone card. It was worth $20 but there were no prizes. 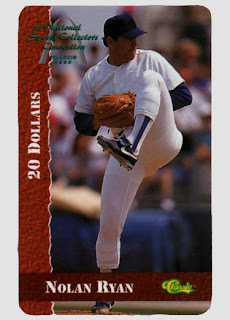 I'm not sure where this card came from but I'll make a guess. It's got the logo for the 16th Annual Sport's Collectors Connection in St. Louis in 1995. This was probably a give away at the show.

You might note the complete lack of team identification on Ryan. It looks like he's pitching a pick-up game in his long johns.
Posted by capewood at 9:19 AM

I love these phone cards from the 90's. In fact, I'm still building the Classic Asset phone card sets. If anyone has any, please contact me. I have the Classic Ryan promo phone card too. Great post!