I recently acquired a few 2003 Richie Ashburn cards to add to the several I had. I thought I'd show them off.

Richie Ashburn was always one of my favorite baseball players even though I don't think I ever actually saw him play. I was born in 1951, one year after the Phillies Whiz Kids went to the 1950 World Series with a young Ashburn. He was one of the best outfielders of the 1950s. He was traded to the Cubs in 1960. In 1962 he was the MVP of the 1962 Mets (quite an accomplishment I'm sure). He retired after that season. He was elected into the Hall of Fame with his good friend Mike Schmidt in 1995.

I know him best as the color man for the Phillies radio and television broadcasts. He started doing Phillies games soon after he retired and continued until, literally his dying day. He passed away in September 1997, in his hotel room, on the road with the Phillies. He was 73. 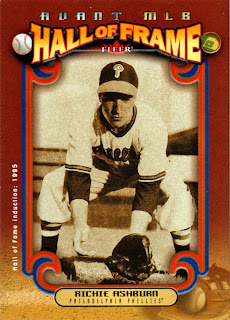 The name of this insert set is a clever (I suppose) play on words. It celebrates Ashburn's election into the HOF. The card is embossed so that the frame around the photo is raised. The card is serial numbered to 299. 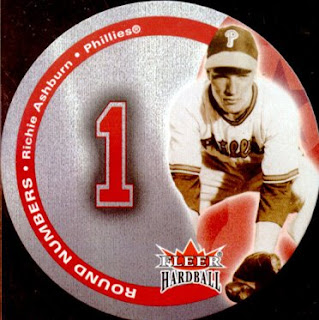 Another serial numbered card, this time to 1,000. This was a 14-card insert set to Fleer Hardball. The base cards for this set are round. There were several of card issues in 2003 which were round for some reason. I'm pretty sure it's the same photo as the Avant card. 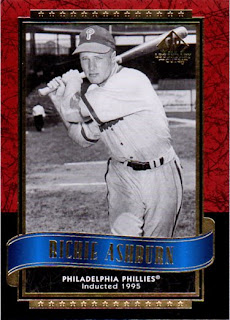 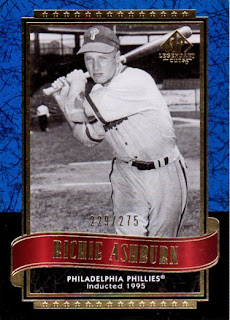 I had the base card and just picked up the Blue parallel, numbered to 275. 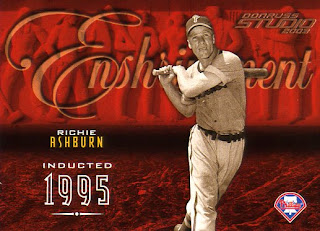 A 50-card inset set in 2003 Studio featuring HOF players. I also have the Schmidt card from this set. The set is numbered to 750. 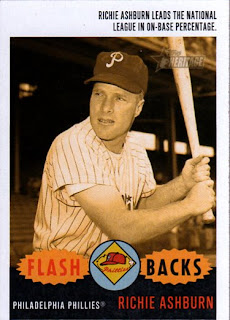 I don't have too many cards from the 2003 Topps Heritage set. Flash Backs is an annual insert set in Heritage. 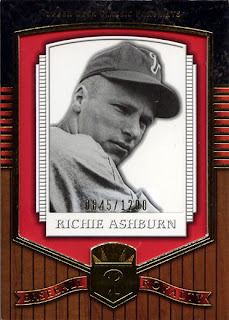 This card is serial numbered to 1200. It is very thick and made made from multiple layers. The top layers are die cut so that the photo is insert several layers down, thus giving a picture frame effect. 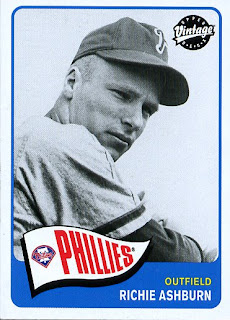 I bought a few packs of Upper Deck Vintage back in 2003 and managed to pull this card from a pack. The photo sure looks familiar.
Posted by capewood at 10:56 AM

Nice post. I have to admit not knowing much about Richie Ashburn. A little before my time but that's no excuse. I like the assortment of cards. It's cards like these that add to the fun of collecting, especially for somewhat older collectors like myself.