I always liked that Topps includes manager cards in their set. Unfortunately, the cards are mostly boring this year. I'm going to use this opportunity to tell my Terry Francona story. 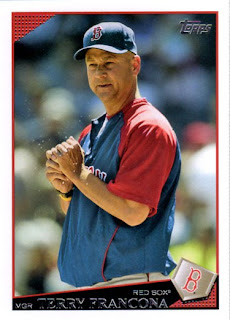 A friend or mine and I went to Spring Training in 2006. One of the games we saw was the Red Sox at the Devil Rays. Before the game we had seen where the Red Sox team bus was parked and near the end of the game we went out there hoping to get an autograph or two. Hardly any of the big Sox players had made the trip and the guys coming out were guys we didn't know and they all ignored the 15 or so people gathered. One guy near us had books. He and the girl with him had about 10 books about the 2005 World Series winning Red Sox. He said he was hoping to get Terry Francona to sign them. Francona came out of the gate with a gym bag and a slice of pizza. Like the rest, he just swept by and onto the bus. The guy with the books said "What a jerk". But then Francona got off the bus. I told the guy I was going to tell Francona what he said. "No, no" he pleaded. Francona signed every one of his books and whatever else the rest had. I got a baseball signed. 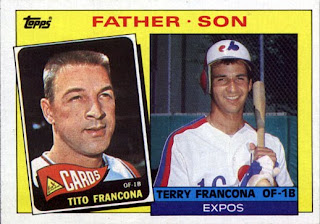 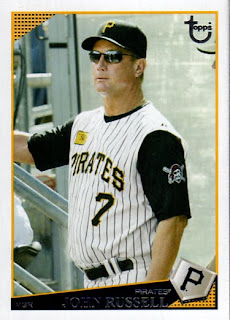 When I saw this card, I thought, can this be the same John Russell who used to catch for the Phillies? 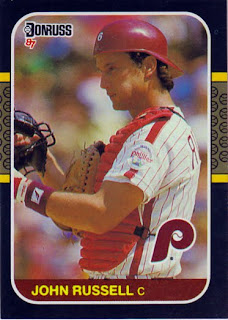