In the 9th inning, with the Phillies up by 9-6, Ryan Howard failed to backhand Angel Pagan’s grounder, resulting in a three-base error. Second baseman Eric Bruntlett bobbled Luis Castillo’s grounder, allowing Pagan to score, and was unable to make what would have been a tough play on Daniel Murphy’s grounder up the middle.

With the tying run on first, Jeff Francoeur stepped to the plate. As the runners were attempting a double steal, he scorched a 2-2 slider right at Bruntlett. Bruntlett caught the line drive, stepped on second base to double up Castillo, then turned toward Murphy, who tried to retreat but was unable to elude the tag. 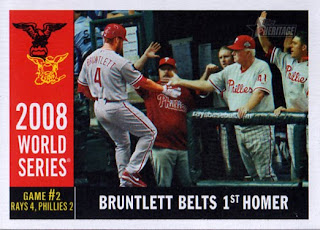 This 2009 Topps Heritage card is the only card I have of Bruntlett in a Phillies uniform. His only other 2009 card is in the Upper Deck set. There was only one regular card for him in 2009, Topps Update. Such is the fate of a utility player, who often doesn't get much playing time.

The last time the Phillies had an unassisted triple play was 1992, executed by Micky Morandini. He got a baseball highlights card out of it. 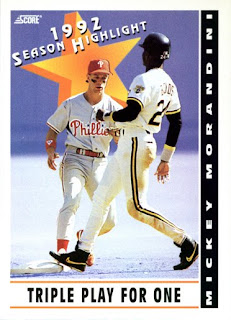 Unless I'm very much mistaken, that Pirate is Barry Bonds.
Posted by capewood at 8:03 AM