I just picked up this nice card on eBay. 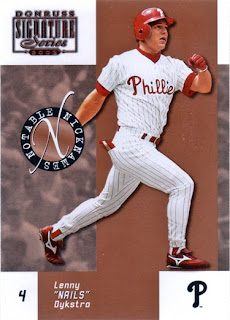 It's a 2003 Donruss Signature Notable Nicknames card, serial numbered to 750. Dykstra's nickname was "Nails". The #4 in the bottom left is his uniform number. This is card #11 of a 20-card set. It's a nice looking card and I'm happy to get it. As I was cataloging it, I found that I also had this other 2003 card of Dykstra. 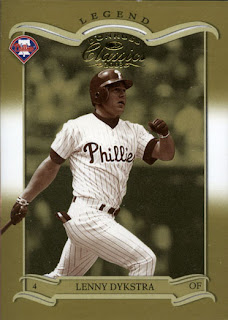 This is a 2003 Donruss Classics, the Legends subset, serial numbered to 1500. Also a nice card. There have been a lot of complaints in the blogs lately about the card companies getting lazy in their duplicate use of photographs. Apparently this isn't a new problem. If the photos on these cards aren't the same I'll eat my Phillies cap. Only the color cast and cropping are different. Granted, it's a great photo but Lenny played in the late 1980s to the early 1990s. There must be a lot of photos of him available. It's not like he's a player from the 19th century and they had to make do with the photos that survived.
Posted by capewood at 12:52 PM