Thursday Night at the Movies - G. I. Joe

The original G. I. Joe toy figure debuted on February 2, 1964. I was 12 years old at the time. Although I remember having lots of little green army men as a kid, I don't think I had a G.I. Joe. I'm not sure what age group this was aimed at but my next birthday wasn't until October and I may have been too old for it (or at least my parents may have thought that). But even still, G. I. Joe has been around for about as long as I can remember. According to Wikipedia, this is the 4th G. I. Joe movie. The other three, which were all animated, went right to video which is probably why I don't remember them. 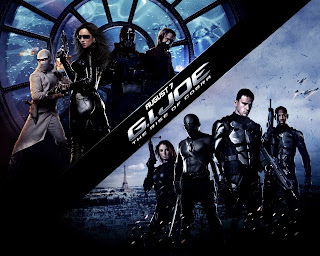 We'd seen the trailers a number of times and thought it would be fun. Even my daughter wanted to see it. Well, I'm sorry to say, it was terrible. It has all the suspense and acting you might find in your typical first-person shooter computer game. Of course you don't go to a movie like this expecting to be wowed by the suburb acting or the finely wrought plot details but really, you hope for more than cliches delivered as woodenly as possible. And the CGI wasn't really that good, either.

In two weeks this movie has made just shy of $100,000,000, but the second weekend gross was down by 60% from the first weekend. It will probably make enough money to consider a sequel. And believe me, the seeds (more like saplings) of a sequel were sown.
Posted by capewood at 4:29 PM

you see, i loved it - i thought it did everything right that transformers screwed up - no stupid pop culture references, good pace, not trying to be sexy or hip - just some cool tech and ninja fights

It's made $100,000,000 so clearly a lot of people liked it. Based on what we saw in the trailers I thought I'd like it too. But I was disappointed. So was my daughter. My wife, however, did like it.

I only wanted to see it because it looked terrible, but it was terrible beyond my terrible expectations and ended up just being terrible in a terrible way rather than in a terribly amusing way.