Way back in December, I did a post on how I organize my cards. I've been meaning to do a follow-up post ever since. Here it is. Clicking on any of the images below will give you an enlarged image.

I have 4 objectives in card collecting:

1. Collect Phillies. I'm currently working on a comprehensive list of Phillies cards. I've completed the 1990s list (there is a link to it on the side bar) and I'm working on the 2000s list (I'm done through 2003).

3. Acquire at least one of every kind of card made. I freely admit this is an impossible goal but it keeps me looking for types of cards I don't have. These cards go in a binder and I call them my reference cards. I've been compiling a list of cards for each year since the 1990s. I used to rely on the Beckett magazine or the manufacture's web sites, but now I get my information from Beckett.com. I don't compile checklists of individual sets, just a listing of sets and insert sets.

So here's what I do when I get a new card. I recently acquired this card, a 2009 SPx Winning Materials Lance Berkman Jersey card. It fulfills Objectives 2 and 3. 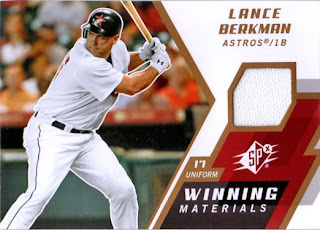 The first thing I do is scan the card, front and back. I consistently scan the cards at 150 dbi. This gives me an image that is about one and a half times the size of the card. It makes for a good size to look at on the computer screen. I use a spreadsheet to track the kinds of card there are and what I have. the image below is for a portion of the spreadsheet showing 2009 SPx. I also track how many of each card there are, the date I acquired the card and how much I paid for it. I give each type of card a number to help in sorting in my database.

The next thing is to enter the card into my database. I have a custom designed (by me) FileMaker database which I've been working on since the early 1990s. There was a time when I used a spreadsheet but I have too many cards for that to be effective. Here is a listing of the 2009 Berkman cards I have. The check boxes on the right indicate if I have a scan of the card (the first box) and if it is a reference card (the second box).

I have a related database which tracks the reference cards. This shows the page for this Berkman card. It displays the image of the card, acquisition history, and some description of the card. The boxes to the left are mainly for base sets where there are subset cards. This file pulls from the previous file any other cards from the set that I have. I only have the Berkman card so that's all it shows. 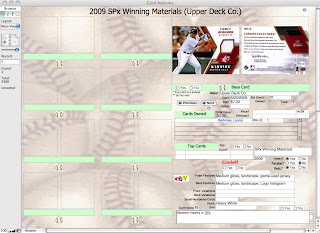 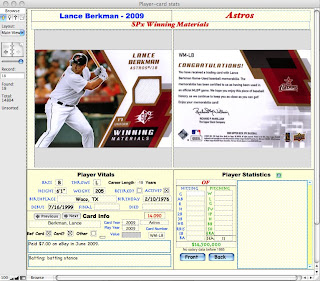 This doesn't take very long. For a player I already have in the file just above, it probably takes 5-6 minutes to finish a card. About a third of that time is scanning the card. If it's a new player it takes a bit longer because I have to look up his stats. I don't update the stats very often. Most are probably a few years out of date.

I don't go through this whole routine for every card I buy. Most cards are not reference cards or players I collect. Those I just enter into the first database. The file has drop down boxes to enter team names, the set name and player names to minimize typing.
Posted by capewood at 9:51 AM

Hey man, cool program! Any chance I could get one (without any charge!)

For the reference list, do you include subset cards for each of the card sets? (like All-star cards in this year's Heritage release) since they're a different design?

I've been doing something similar with my cards (though not to your level) and have been divided about this issue. Any insight?

Drew, I'm considering offering copies in trade for cards. You'd have to have a copy of FileMaker 9.0 to make it work.

Dan, yes, I include the subset cards. In the next to last image, the blank boxes on the left side are for subset cards.