You've seen these cards that have "Now With..." printed on the front. 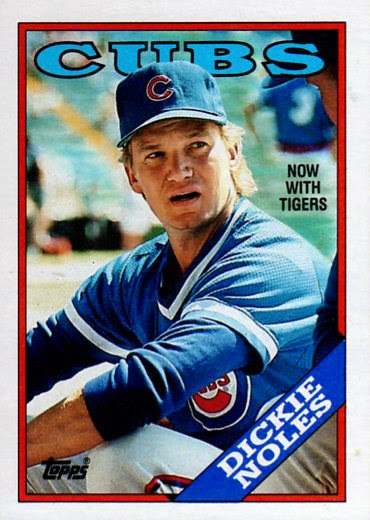 I mostly associate this with Topps cards from around 1985 to 1990. This was after Topps mostly stopped airbrushing caps to show players with their new teams and well before Topps started Photoshopping players into whole new uniforms.

Really, loaned? I don't remember hearing about that sort of arrangement before. That's what baseball-reference.com calls the arrangement. Here's what Wikipedia says about it:

"In 1987, Noles became one of only four players in history to be "traded for themselves", joining Harry Chiti, Brad Gulden, and John McDonald, Noles was traded from the Cubs to the Detroit Tigers for a player to be named later. 33 days later, the teams were unable to agree on what player Chicago would receive, and so Noles was shipped back to the Cubs, completing a deal in which he was traded for himself."

Topps would have had a hard time getting a game photo of Noles with the Tigers since he only appeared in 2 innings. He got two saves in those appearances so maybe in a small way he helped the Tigers win the AL East. The Tigers won the division by only 2 games over the Blue Jays.

The funny thing, in relation to this card, is, as Wikipedia noted, that Noles was returned to the Cubs on October 23, 1987. And he actually played for the Orioles in 1988.
Posted by capewood at 11:05 AM