This is a post I've been meaning to make for awhile.

How many fielding plays does a pitcher make in an average game?  I have no idea, maybe 2 or 3. How many fielding plays are made in a game? Again, I don't know but I imagine that the average is around 40. You figure there are 27 outs, but some of those would be strikeouts. Then you have hits and errors, each one would be a fielding play. Pickoff attempts by the pitcher and the catcher. Throws by the pitcher to first, and wild pitches and passed balls. I'll show some stats below that suggest that between 5-8% of the batters faced end up with a fielding chance for the pitcher. Some, guys who throw a lot of ground balls will have more. Pitchers who get a lot a fly ball outs will have less.

How many baseball cards do you own that feature a pitcher fielding? My rough estimate, based on how many pitcher cards I have scanned and how many of those feature the pitcher fielding, is 0.2%. So pretty rare.  I just pulled one from a repack so I thought I'd show some of the one's I have.  I called this Part 1 because I have enough for at least 2 posts. 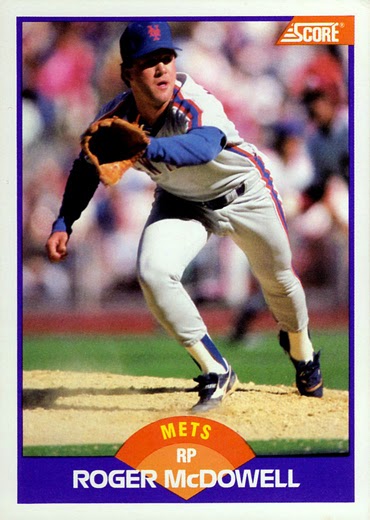 This is the card I just pulled. Roger faced 4,517 batters in his career and had 395 fielding chances. That works out to 8.8% of the batters he faced. He had a career fielding percentage of .939 with 24 errors over 12 years. 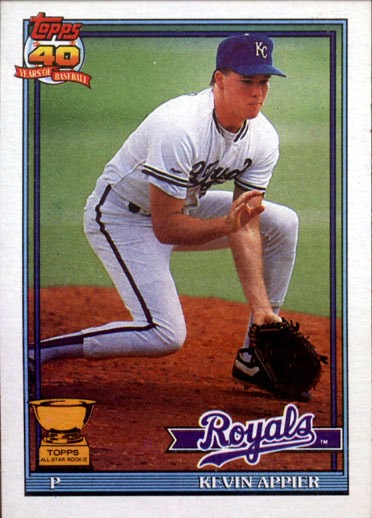 Kevin's getting set for a grounder back to the mound. Watch out for that bad bounce. Appier faced 10,958 batters in his career and had 493 fielding chances (4.5%). His fielding percentage was .973 with 12 errors. Was he a better fielder than McDowell? I guess so. 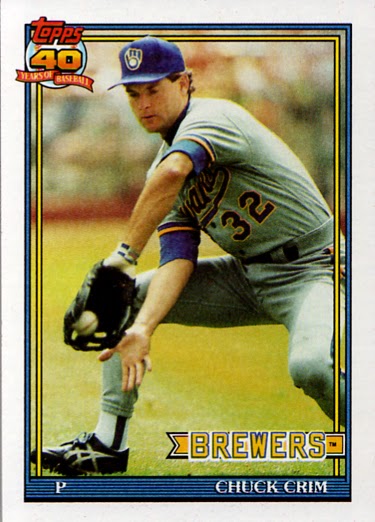 I love cards featuring fielding plays with the ball in the frame somewhere. Crim had a much shorter career than either McDowell or Appier. In 8 years he faced 2,969 batters with 167 fielding chances (5.6%). He had a career fielding percentage of .934 with 11 errors. Here's a play he at least made the first part of right. He still has to throw it somewhere. 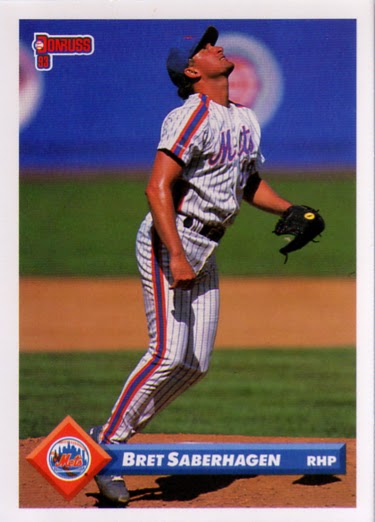 An infield pop up. Did he field it or get called off by another infielder? Bret had a fielding chance with 6.2 % of the batters he faced. I'm going to stop calculating this now since I made my point. The percentage of baseball cards featuring pitchers fielding is much less that the percentage of actual plays made by pitchers. He had a career fielding percentage of .963 with 24 errors in 16 years. 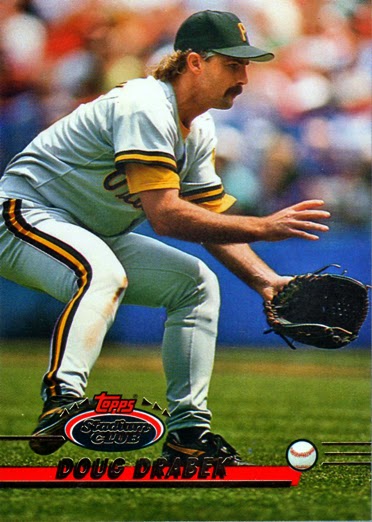 Doug is way out in the grass somewhere trying to make this play. He had a career .954 fielding percentage in 637 chances with 29 errors. Maybe not the best fielding pitcher but he also won 155 games. 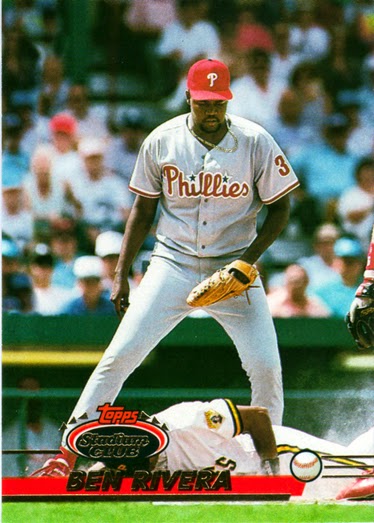 This is a weird looking play. It looks like Ben was covering first and the batter slid into the bag. You see this sort of play a lot now but were runners doing that much in 1993?  The guy doing the face plant appears to be Will Pennyfeather. Rivera only had a 3 year career but had a .981 fielding percentage with one error in 52 chances. 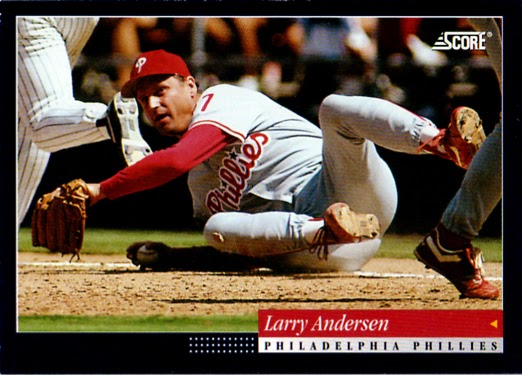 This sure looks awkward. Larry seems to have the ball in his glove but there's an opponent heading off-card on the left. Andersen was a pretty good pitcher with a 3.15 ERA over his 17-year career. But he apparently wasn't a good fielder as this photo suggests. He had a .908 fielding percentage with 25 errors. 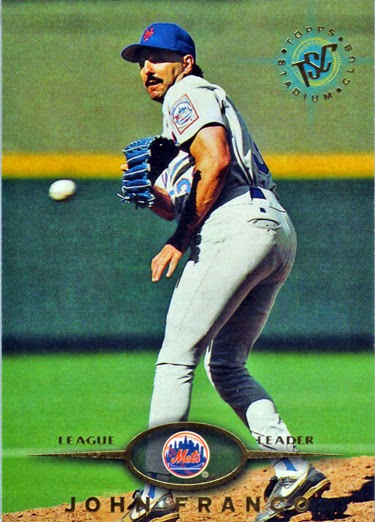 Here's what you call a come-backer. That ball is real close to John and his glove is not in position. I hope he caught it. Along with his 424 saves, Franco had a .964 fielding percentage with 11 errors. This might have been one of them. 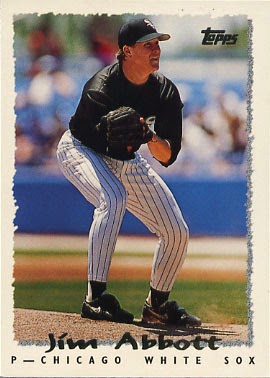 This is probably not a fielding play. It looks like Jim is transferring the glove from his left hand after throwing. I never saw Abbott play much and I've always been interesting in how he fielded. 5.3% of the batters he faced resulted in a fielding play for him, so he certainly had his fair share of chances. His career fielding percentage was a pretty good .976 with 9 errors. 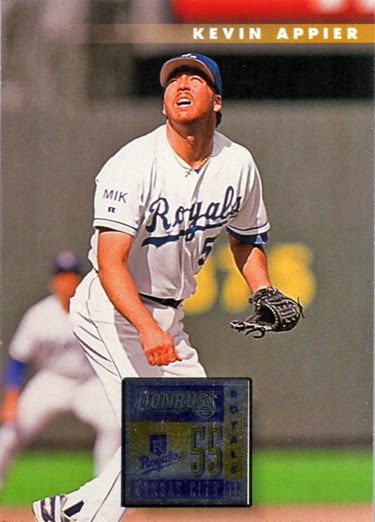 Here's Kevin Appier again. This could be an infield pop up but it's more likely he's watching a ball going way over his head.

Where's Greg Maddux? It's interesting that Appier seems to have a bunch of fielding shots. Maddux won 18 Gold Glove awards, including three seasons with a perfect fielding percentage. Plus, he has the most put-outs in a season of any pitcher (39, 3 times including one of the perfect seasons), and is second (to Jim Kaat's 72) with 71 assists in one season.

I'm not complaining. I'm just wondering if you have any fielding Maddux cards. I guess those could be coming in the second post, and I'm jumping the gun!

But looking at the stats for a couple Gold Glove pitchers, the average looks to be anywhere from 1-3 chances per game. Kershaw averages just over 1 chance per game, while Maddux is somewhere around 2.3 (over 3 per game in one season). But McDowell averaged only about .5 chances per game, since he was a reliever.

I guess the best measure would be the percentage you used, or Range Factor per Nine Innings: http://www.baseball-reference.com/leaders/range_factor_per_nine_p_career.shtml. Maddux: 3.127 chances per 9 innings, McDowell 3.180. Kaat and Kershaw don't make the list.

Only one modern player makes the list: Henderson Alvarez, way near the bottom (2.580/9 innings).

When you figure that a pitcher throws, say, around 100-150 pitches over nine innings, the odds that one of those will be fielded are pretty slim. More than .2% which your comment suggests is captured on cards, but certainly a small chance. And being so close to the plate, capturing fielding action can't be easy!

I look forward to seeing more cards in this series...

Ryan, thanks for the comments. For this post I was just using cards I already have scanned. I have about 265 Greg Maddux cards, most not scanned. But looking through them I see I have 3 cards of him fielding. I actually have more cards of him batting than fielding. But these cards will make the core of another post.

Love the 93 Stadium Club cards. It looks like Drabek totally miss judged the ball and Ben Rivera is looking on in pity for the poor pirate that took a ball to the nads!