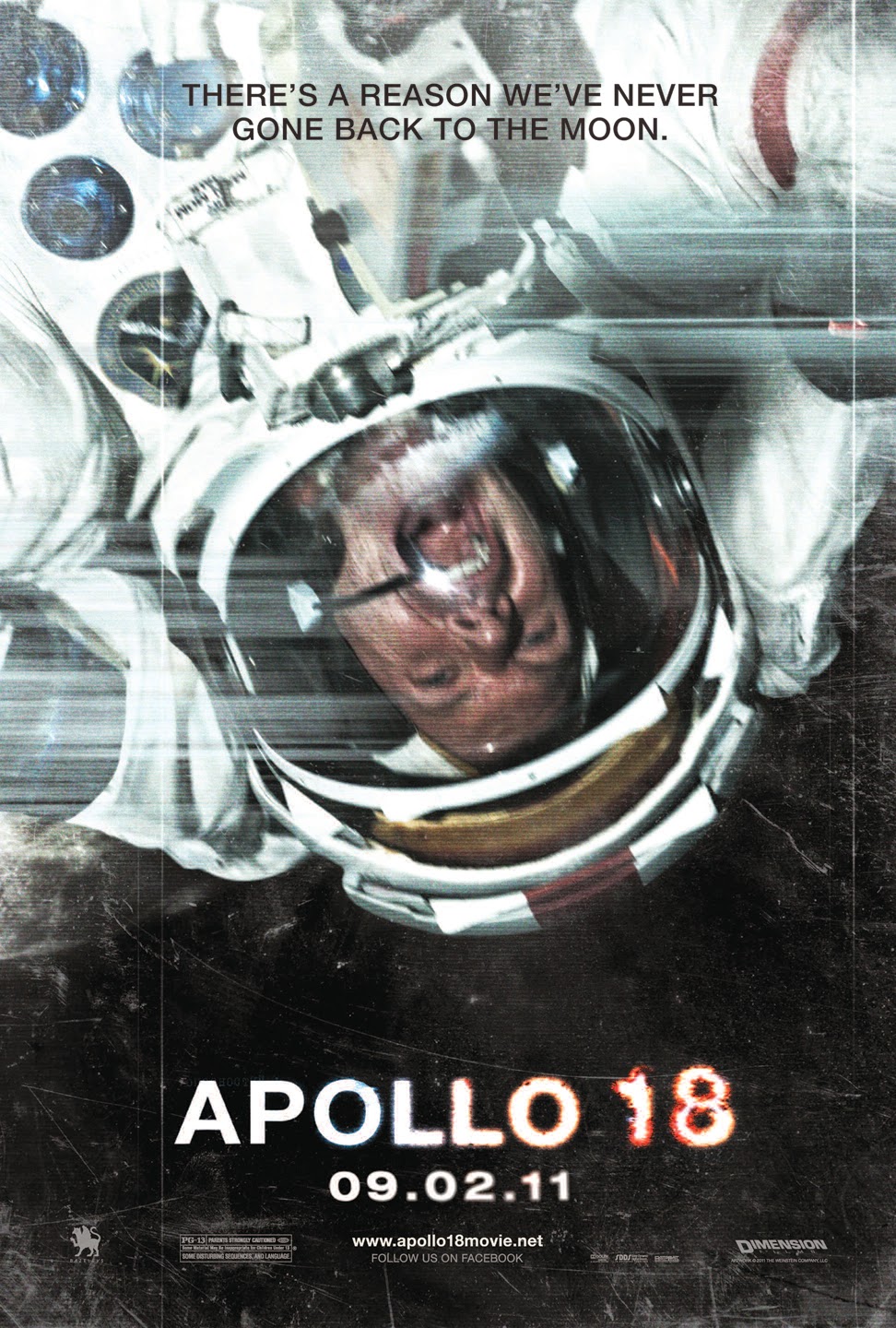 And the reason is moon spiders.

Thought the Apollo moon missions ended with Apollo 17?  This 2011 movie says differently.  After the remaining Apollo missions were canceled, NASA decided to launch one more, Apollo 18, in secrecy. It would be a military mission to place a system that would give the US early warning of a Russian missile strike against the United States.

For some reason, the director decided to go with the 'found footage' genre. I guess it added some suspense but since a lot of the footage shot on the moon was with hand-held movie cameras, it sure isn't clear where the footage was found. Also, the footage was supposedly released on an unofficial website.

I didn't know any of the actors in this. The entire cast of the movie is basically the three astronauts. Warren Christie (Commander Nathan Walker), Lloyd Owen (Captain Ben Anderson), and Ryan Roberts (Colonel John Grey) play the crew. Walker and Anderson descend to the moon on 'Liberty' while Grey stays behind in the obit on 'Freedom'.

The second day, they look over the rim of a nearby crater and see another space craft. They get into the rover and drive over to it. It's a Russian moon lander!  They manage to get into it. They find some blood but the lander appears to be operational with good supplies of air and fuel.

Then they find a pitch black cave nearby and Commander Walker decides to take a look. For illumination he has some sort of strobe light, which makes for some suspenseful footage but doesn't make much sense. He finds a dead cosmonaut.

Walker and Anderson get back in their lander and things really start to go bad. Communications with Freedom and NASA are completely down. Walker thinks something is in his spacesuit and although they don't find anything, he's got a laceration on his abdomen and something seems to be lodged under his skin. Anderson pulls it out and it looks like a moon rock. Walker smashes it with a hammer.

After another sleeping period (while we watch something small skittering around the lander), they attempt to launch but something goes wrong. Outside the lander they can see that the flag they put up has been knocked down and the rover is sitting on it's side. Still no communications. Walker is sick and clearly infected. And their air is running out.

Anderson decides they have to abandon their ship and make to the Russian ship. He manages to get Walker in a spacesuit, but Walker collapses on the trip and appears dead. Anderson decides to take one more look into the dead cosmonaut cave and sees things erupting from the moon dust. He rushes to the Russian ship and seals himself in. After he powers it up, he manages to establish communications with Grey in Freedom. Grey has been spending a lot of time saying "Freedom, do you read me?" Then they make contact with NASA and then a military guy who says, yea, we knew what you were going to find and you can't come home because you're infected too.

Anderson and Gray decide, against orders, to launch the Russian ship and meet with Freedom, where Anderson will have to make a space walk between the vessels. Just before the rocket goes off, Walker shows up at the window with an ax and attempts to break in. He's got what look like giant spiders running around inside his helmet. Anderson launches and indeed he is infected and passes out after he gets aimed at Freedom. The out-of-control Russian ship crashes into Freedom and the movie ends.
Posted by capewood at 4:26 PM