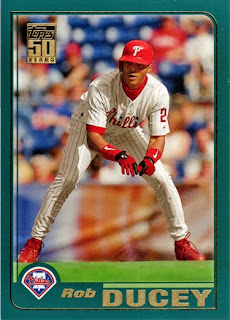 Rob Ducey had a pretty long career, mostly as a utility outfielder and backup player. He played for the Phillies near the end of his 13-year career. He has the distinction of having been traded away by the Phillies and later being reacquired by the Phillies in trade. That's probably not that an unusual transaction but it this case both trades were with the same team, in the same year!

Although he appeared in 246 games for the Phillies in 1999-2001, he only had 367 at-bats, which means he was mostly used as a late-game replacement or as a pitch-hitter. On July 26, 2000, he was traded to the Blue Jays for a player to be named later. That player was minor leaguer John Sneed and the transaction was completed on July 31, 2000. The ink had barely dried on the agreement before the Blue Jays traded Ducey back to the Phillies for Mickey Morandini on August 7, 2000.
Posted by capewood at 4:41 PM