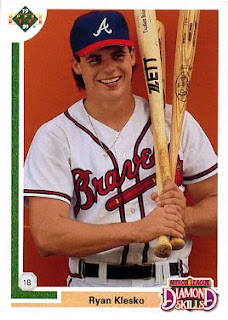 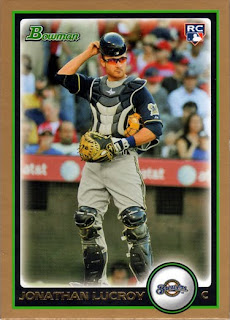 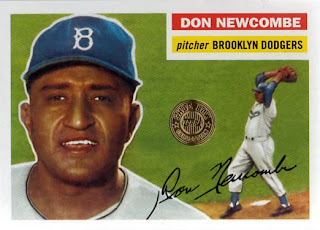 Since Newk is far and away the best player born on this date, I had to dig this card out of a box and scan it. He was born in 1926 in Madison, NJ. The Brooklyn Dodgers signed his as a free agent in 1946 and he spent 7 of his 10-year career with the Dodgers. According to Wikipedia, he is the only player to win the Rookie of the Year, a Cy Young Award and an MVP award in a career. The Cy Young and MVP came after his 1956 season when he was 27-7 with the Dodgers. He was also a 4-time All-Star. He received HOF votes in every year he was eligible, but not enough to get in. 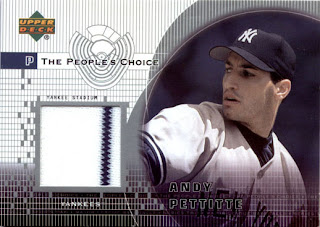 There were a lot of choices for today. Two Hall of Famers (Wade Boggs and Billy Williams) a future HOFer (Time Lincecum) and a guy who played in the 1880s named Peak-A-Boo Veach, but I decided to go with another future HOFer. Andy was born in 1972 in Baton Rouge, LA. He was a 22nd round draft pick of the Yankees in 1990. Except for three years with the Astros (2004-2006) he played his entire 16-year career with the Yankees. Although injured for most of his first year in Houston, he bounced back with a 17-9 record in 2005 to help lead the Astros to their first World Series (which they lost in four games to the White Sox). Overall Andy had a 240-138 record with a career ERA of 3.88. He has a 19-10 record in 30 postseason appearances including 8 World Series. He has 5 World Series rings, his most recent acquired over the Phillies in 2009 when he went 2-0 in the Series. 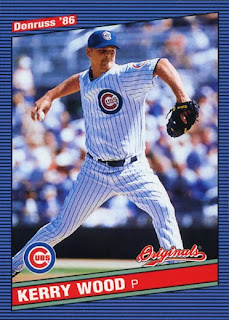 Kerry was born in 1977 in Irving TX. He was the Cubs #1 pick (and 4th pick overall) in 1995. He was 13-6 with the Cubs in 1998 and was the NL Rookie of the Year. He then missed the entire 1999 season due to an elbow injury. Injuries seem to be the defining aspect of his career. He has been on the DL 14 times in his 13-year career. In 2004, the Cubs started using him as a reliever, and made him their closer. He had 34 saves that year. He signed with the Indians after the 2008 season and had 20 saves that year. He was traded to the Yankees in 2010 but this year he is back with the Cubs. Sometimes you see a guy come into the baseball with great promise but, for one reason or another, can't make it on the major league level. And sometimes you see a guy like Wood who seemed poised to be one of the greats but was cut down by injuries. 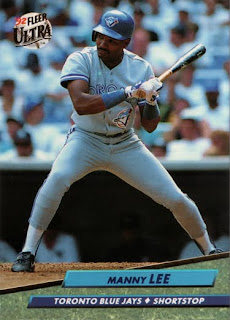 There weren't a lot of good choices for this year. Manny was born in 1965 in that noted baseball town of San Pedro de Macoris, DR. Wikipedia lists 30 players as having been born there. Manny was a middle infielder, originally drafted by the Mets in 1982. He played 8 years for the Blue Jays, 2 years for the Rangers and finished his career in 1995 with the Cardinals. Manny was mainly a part-time player but he has something many baseball players don't, a World Series ring., won with the Jays in 1992. 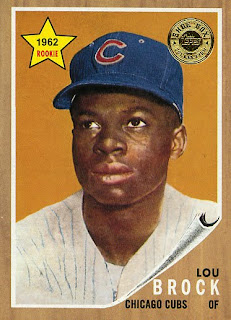 Lou was born in 1939 in El Dorado, AR. He was signed as a free agent by the Cubs in 1960 and played for them from 1961 to 1946. Until I saw this card, I didn't realize that he played for anyone other than the Cardinals. He was traded to the Cardinals in 1946 and played there for the next 15 years. Brock is know mainly as a base stealer, having swiped 938 in his career. He is second behind Rickey Henderson. In order to steal that many bases, you have to get an base a lot. Brock had a career BA of .293. He won a number of major awards including the 1976 Babe Ruth Award, the 1974 Player of the Year Award (the year he stole 118 bases), the 1957 Roberto Clemente Award, the 1977 Lou Gehrig Memorial Award and the 1979 Hatch Award. He was elected to the Hall of Fame in 1985, his first year of eligibility.
Posted by capewood at 9:27 AM