Movie of the Week - Super 8

Written and directed by J. J. Abrams. Produced by Steven Spielberg. How could this possibly not be a great movie? What a dumb question, there are many ways in which this could have sucked but fortunately, it does not suck. In fact, it's a great movie. 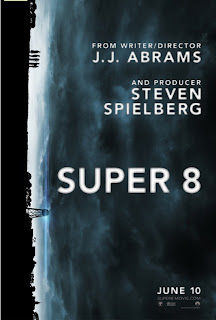 The movie mostly told from the perspective of a group of junior high school kids. One of them is trying to produce a zombie movie to enter into a Super 8 movie festival. You may have to explain to your younger children what Super 8 is and why the kids didn't just make a video with their iPhones. It's 1978, an apparently more innocent time. They kids are at the small town train station (hopefully you won't have to explain trains) filming late at night. As they are rehearsing the scene, they hear a train coming. The kid director is ecstatic. "Atmosphere" he says and gets the camera rolling.

He got lot's more atmosphere than he expected as a pickup truck drives in front of the train just pass the station, resulting in a spectacular crash. The kids go running and screaming in different directions as flaming wreckage pours down around them.

The next day things start to get weird. All the town dogs disappear. People start disappearing. The engines get stolen from every car on a used-car lot. Microwave ovens get stolen from people's homes. And a massive contingent of Air Force personnel arrive to take over the wrecked train.

The kids are really good in this. Joe, played by 15-year old Joel Courtney is sweet and vulnerable as a kid still, 4 months later, trying to cope with the accidental death of his mother. Shy and nerdy, he takes the lead in trying to figure out what's going on. Alice, played by 13-year-old Elle Fanning, is also sweet. She's recruited to be the film's only female character by the kid director because he has an enormous crush on her (as apparently does every boy in the area). It's funny, that in the movie, she's supposed to be a bit older than the boys but in real life she's younger.

I highly recommend this movie. And bring the kids. There is some strong language (mostly used by the kids, so probably nothing your kids haven't heard, or probably said). Beyond some longing looks between Joe and Alice, there is no sex. The movie might be a bit intense for younger kids.
Posted by capewood at 10:27 AM

This was kind of dissapointing, mostly because of the final third of the movie once the "Creature was revealed" and the kooky ending - Cloverfield was much better