I bought one of those 100-card Fairfield rack-packs which promise to have a relic card in every 4 packs. I've bought several of these now and finally got my relic. But even beyond that, this pack keeps my string of repack success alive. Of the 100 cards, I didn't have half of them. Considering how much junk wax I have, I think that's a pretty good ratio. 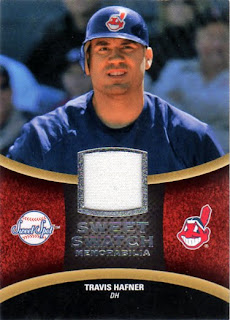 I have nothing against Mr. Hafner, but I already have two cards from this set and I don't need another, unless it's a Phillie. So I'm offering this card for trade. I'd like a comparable Phillie relic in return. Let me know if you're interested. By the way, I checked, and this card is not currently available on eBay. 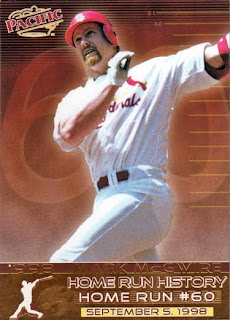 Pacific produced this 70-card set to commemorate McGwire's hitting 70 home runs in 1998. This is the 7th card of this set I've picked up in repacks. The set was originally available as a boxed set. 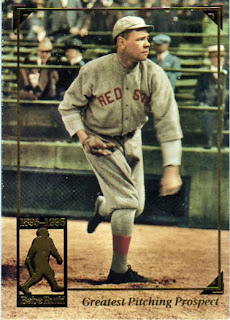 This was a nice find. I have several cards from a 1992 Ruth set produced by Megacards. This 1995 set had 25 cards, only 4 of which were printed in color. What's nice about this card is that it has Ruth as a Red Sox. Even better, he's pitching. The card has a nice glossy finish and a gold foil border. The Ruth logo is also in gold. 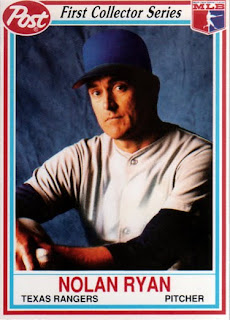 This was a 30-card set available in some Post brand breakfast cereals. Post stopped having baseball-related items a few years ago. I miss them. Post had a license from the MLBPA but not from the MLB which accounts for the anonymous uniform that Ryan is wearing. In those days this was accomplished by air brushing. This is only the second card from this set I've seen. In my experience Post cereal cards are rare items in repacks and I'm happy to have scored this Nolan Ryan card. 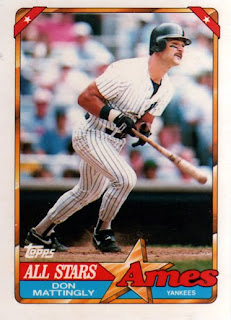 This was a 33-card boxed set produced by Topps for the Ames Department Store chain. Topps produced a number of these sets around this time (see the next card). Unlike the Topps regular sets of the time, these cards feature a heavy gloss on the front. I've used the magic of Photoshop to fix the color balance of this card so you can't see how yellowed the white borders have become. 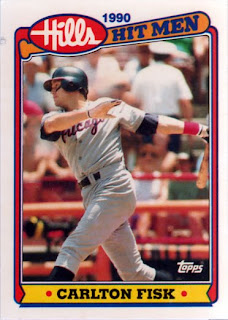 This was another 33-card set produced by Topps, available from Hill's Department Stores. These store's were located mostly on the East Coast. Ironically, the Hill's chain was taken over by the Ame's chain in 1999. I've never seen either store.
Posted by capewood at 12:42 PM

I like that Hafner. Do you need any of these: Utley 2007 Masterpieces Captured on Canvas (jersey), Rollins 2006 Bazooka Rewind (bat), Matt Maloney (I have no idea who this is but he's a Phillie and it's Bowman) 2006 Bowman Heritage auto? Email me if you're interested. Thanks