The Art of Bunting 3

I've done posts on bunting before (twice in fact). This time I'm going to focus on cards where the ball is in the shot and see if we can figure out if the ball is coming or going. 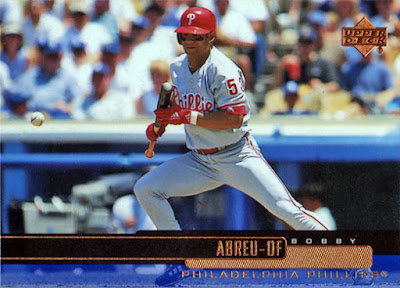 This is a pretty good photo. I'd say that the ball is on it's way out. Abreu's left hand is coming off the bat and he looks like he's starting to run. If baseball-reference.com gives stats on bunting, other than sac bunts, I've yet to find them. I assume that the stat on sacrifice bunts only includes bunts that moved a runner up but wasn't a hit or it wouldn't be a sacrifice. I have 4 cards featuring Abreu bunting but in his long career (18 years) he only had 7 sacrifice bunts.

I tried this search on Google "how many butns are a successful sacrifice". Notice I accidentally spelled bunts wrong. Google assumed I meant "how many buttons are a successful sacrifice". No useful information there. Let's try that again. Here's a link to a page analyzing bunts. It's pretty long but Abreu is specifically mentioned as having bunted the ball fair in 4 of 29 attempts. So clearly Abreu didn't bunt much but ended up with a bunt photo on at least 4 cards. OK, enough of that, lets get back to baseball cards. 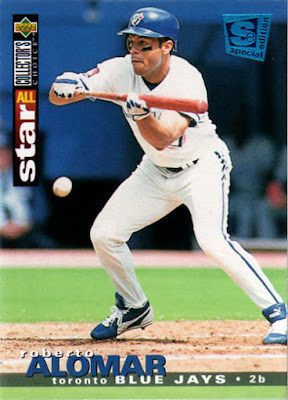 Clearly the ball is going out or Roberto is going to miss this by a mile. Also, his eyes are not on the ball. Alomer had 148 sac bunts in his career and lead the league with 17 in 1989. 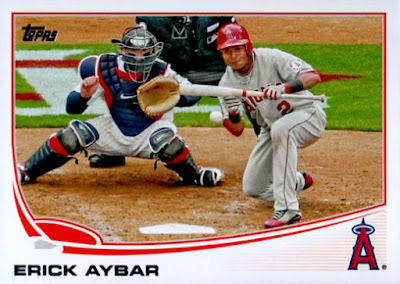 Aybar shows pretty good form here and I think the ball is on it's way in. Aybar was apparently a pretty good bunter having 69 sac bunts in his 10 year career. 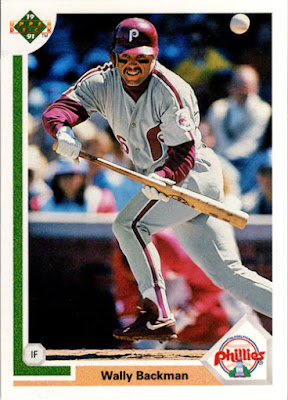 Clearly the ball is hit as it sails over Backman's left shoulder. Backman had 68 sac bunts, most of them in the first 10 years of his career. He led the league with the Mets in 1985 with 14. This was not one of his successful attempts. 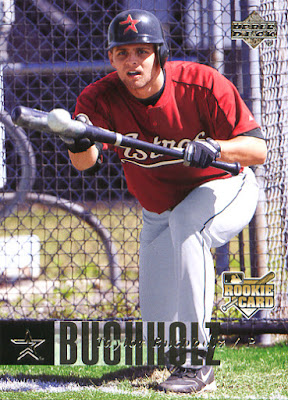 Here's a pitcher actually practicing bunting. The ball is so close to the bat that who can tell which way it's going? All that practicing apparently do much good as Buchholz had exactly 5 sac bunts, 4 in his 2006 rookie season, in his 5-year career. 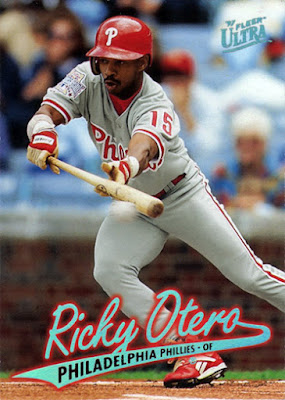 In his short, 3-year career, Otero only had 4 sac bunts, so this is a photo of a rare event. But its a good photo. I'd say the ball is hit since Otero's left hand is coming off the bat. 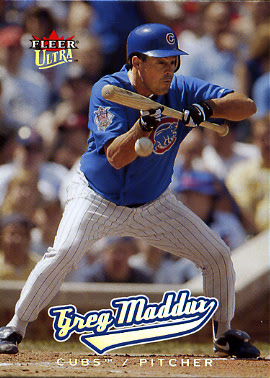 Maddux clearly got this bunt down. For a pitcher, Maddux handled the bat pretty well with a career .171 average and 180 sac bunts.