James Bond is back! 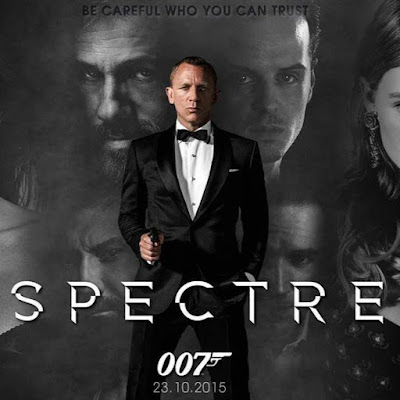 "Spectre" seems to complete a trilogy that began with "Quantum of Solice", continued in "Skyfall" and now, maybe, finishes with "Spectre". If you're planning to see it you might want to go and read a synopsis of the two earlier movies. I think it will help make the first part of "Spectre" more comprehensible.

For those long time Bond fans (I mean people who have been watching the movies since the 1960s) you'll remember SPECTRE as the name of a worldwide, multi-national crime organization which made its first appearance in "Dr. No" in 1962. This new Spectre (it's not clear if it's supposed to be an anagram anymore) seems to be an offshoot or something of the Quantum organization.

It has all the stuff you want in a Bond movie: car chases, helicopter stunts, gadgets, fist fights, guns, guns, and more guns, beautiful women (Bond only gets to seduce 2 of them), beautiful scenery (the movie is filmed in London, Morocco, the Alps, Rome, and Mexico City), and explosions. The movie is reportedly one of the most expensive movies ever made with a budget of $250 million. Every dollar of that is on film. As of 11/10 the movie has made $305 million so after only a week or so it's already making money.

I was disappointed by the last Bond movie, "Skyfall". Sure it did all the Bond stuff pretty good, and while I don't expect a complicated plot, I do expect some plot. Also, that Skyfall only turned out to be Bond's childhood home was quite a comedown.

"Spectre" is much better in regards to plot and the movie making, at least, some internal sense. The trailers have been careful not to give the story away, so I won't either. Some consequential things happen in this movie, consequential for the Bond universe. The next movie (at the end of the closing credits it said "James Bond will return") will have to be strongly influenced by the happenings here.

My only real complaint with the movie is Daniel Craig. His Bond is more and more a character that seems completely detached. His lines are delivered in a deadpan way, even the slightly humorous lines are too droll. There is some spark of life in Bond's eyes in the closing scene, but it was a long time coming.

As in all movies of this type, the villain is ofter more concerned with glorying in his bad-assness then he should be, allowing the hero time to figure out a way to escape.
Posted by capewood at 10:00 AM