While out looking for 2017 Topps I came across a discounted blaster of 2016 Topps Gypsy Queen. I'm not in love with this set and only bought a few packs last year but the blaster was only $11.98 and promised "1 Exclusive Short-Printed Mini Base Card Parallel Inside!" 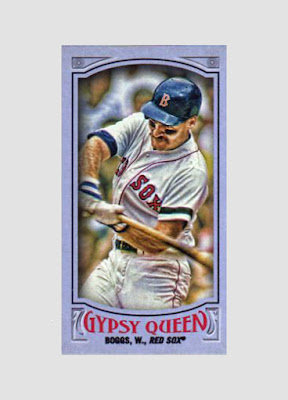 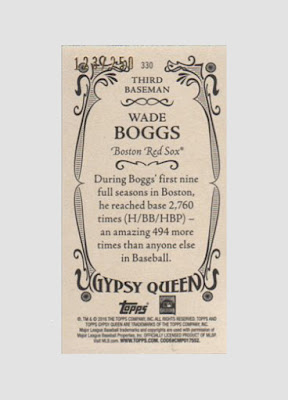 It turns out that I'd pulled one of purple minis these from one of the 3 packs I bought last summer but this still goes in the reference books since it's the retired players subset. 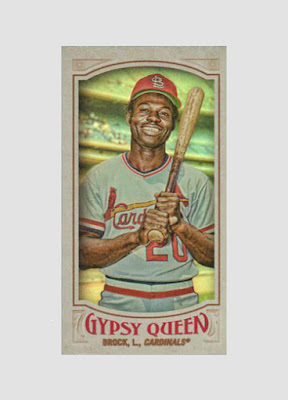 I also pulled this from the box, a foil-backed mini I didn't know existed. Apparently these are only available in blasters. It's a 50-card set, numbered 301-350. As usual with this kind of card, I'm happy I have it but who was asking for foil-backed Gypsy Queen minis? 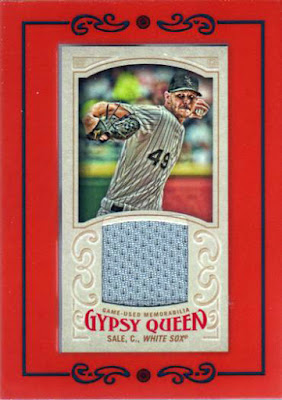 I'm always happy to pull a relic card from a blaster. 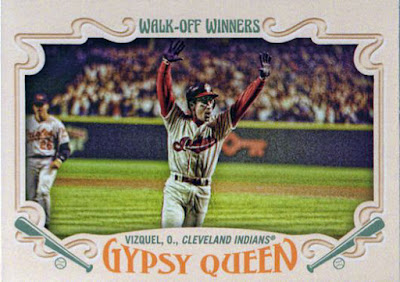 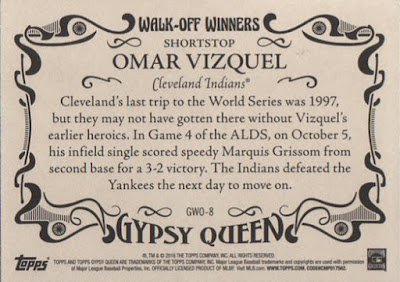 And another card for the reference book is this insert I didn't have.

Many baseball cards have a few sentences on the back highlighting something about the player. I guess these little paragraphs are probably difficult to write, not because it's hard to think of something to say about a player but because there is so much that could be said. Sometimes these read like they were plucked from a bucket of random stats for each player but a few of these Gypsy Queen backs stood out for me. 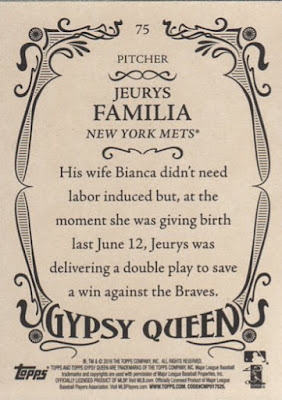 So Familia was pitching a save while his wife was giving birth. His bad luck, I guess, that he couldn't be there with her. But what is that opening line "His wife Bianca didn't need labor induced" supposed to mean? His Wikipedia page wasn't much help beyond saying she was his fiancée at the time and that he was arrested last October on domestic violence charges. 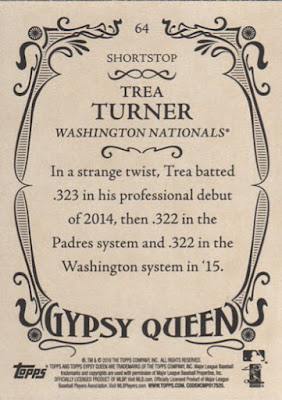 Why exactly is it strange that Turner hit .323, .322 and .322 in his first three professional seasons? And where is the twist? There were no clues on his Wikipedia page.
Posted by capewood at 10:00 AM

Nice pulls, not bad for a blaster. You're right about the Turner text - it should read "Turner is remarkably consistent" not "in a strange twist"..a strange twist would be if he got his first MLB hit off the pitcher he was traded for, for example.

I have no idea how to 'fix' the Familia text.

There's a joke in here someplace about a Chris Sale uniform swatch but I'll leave it up to cleverer readers to make it. Oh, and congrats on your blogging anniversary last week.

Pretty nice pulls. 40% off is hard to resist. The wording on those is awful. Reminds me of me.

You had me at 2016 Topps Gypsy Queen Discounted Blaster. Just the entertainment factor alone is worth the $11.98.

I'm always happy to see one of those discount stickers on a blaster. Looks to me like you got more value out of yours than I usually do!