It was with a lot of sorrow when I woke up Monday morning to learn that David Bowie had died at 69. If I had to make a list whose overall body of work I could not do without, David Bowie would be in the top 5.  I don't own every David Bowie album and I really lost track of him during his Tin Man years but I have his 2013 release and will buy his latest. 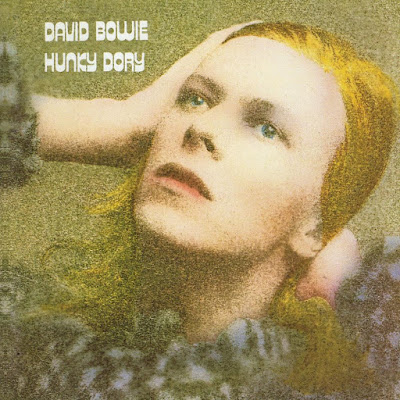 "Hunky Dory" was released on December 17, 1971. I had just turned 20 and was about to spend my first extended period of time away from home. I had a co-op job through Drexel University for 6 months on Long Island starting on January 2, 1972. This was one of the few albums I took with me and I played it constantly. It was not Bowie's first album but it's the first one that drew much attention. Picking my favorite song from most of these albums is going to be tough, but I'm going with "Life on Mars" for this one. 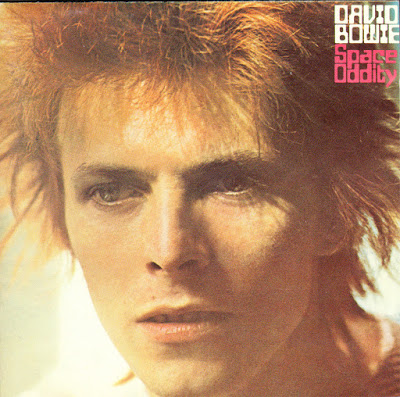 This is probably the 2nd Bowie album I bought. "Space Oddity" is a 1972 release of his November 4, 1969 album "David Bowie", renamed after the lead track which had been a minor hit in 1969, especially in Great Britain. After the success of "Hunky Dory" RCA rushed out several older Bowie albums with new packaging. My favorite song is not the title track, but "Janine". 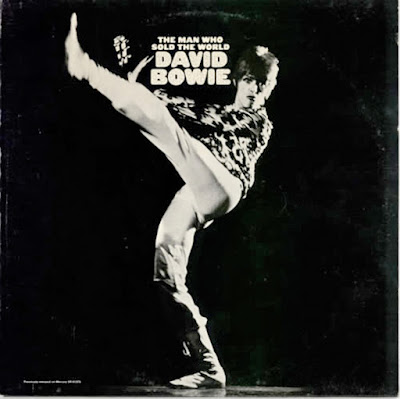 "The Man Who Sold The World" had originally been released on November 4, 1970. I have this repackaged version that came out in 1972. In just three albums, Bowie had shown a great variety of styles, from the prog rock sensibilities of "Space Oddity", hard driving rock in "The Man Who Sold The World" to more of a folk-rock sound in "Hunky Dory". Although each album was different, I loved them all. For my favorite track I'm going with "All The Madman", just edging out the title track. 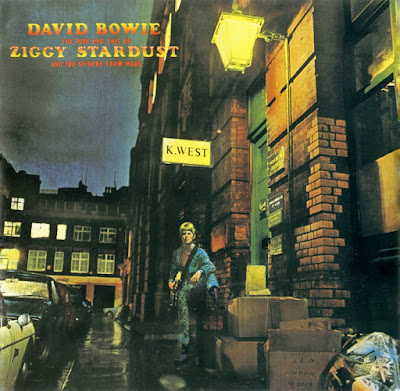 "The Rise and Fall of Ziggy Stardust and the Spiders of Mars" released on June 16, 1972, just blew me away at the time. Over 40 years later, I can still listen to any track on this album without tiring of it. Hard to pick just one track, but I'm going with the first track "Five Years". 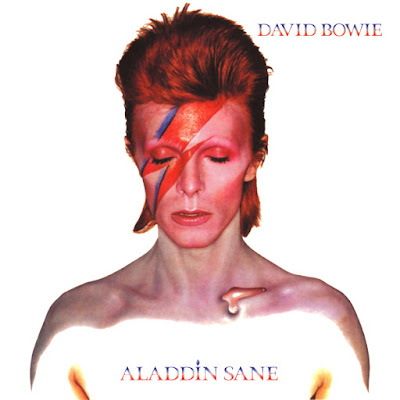 Reading about "Alladin Sane" (4/13/73) on Wikipedia I see that opinions on this album are mixed. But you know, back then, I wasn't reading reviews to decide what to buy. It was a new Bowie album so I bought it. To me, it's very much like Ziggy Stardust, part 2.  Favorite track, without a doubt "Panic in Detroit". 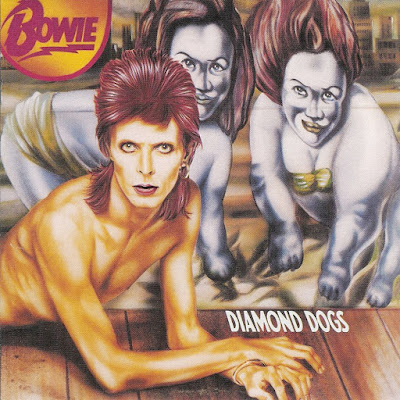 "Diamond Dogs" (5/24/74), is a post-apocalyptic concept album that managed to grab me twice, once as rock and roll, and again as science fiction. The title track is great but for shear drama and post-apocalyptic bleakness, I like "The Candidate" 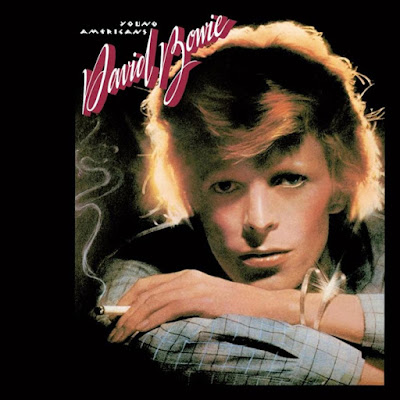 "Young Americans" (3/7/75) is almost a repudiation of his entire career so far. Recored at the famed Sigma Sound Studios in Philadelphia, he goes full blue-eyed soul here. But Bowie's genius is, that what ever music style he tries, he gets it right. One of my other top artists is Neil Young, who has had just as many musical twists to his career as Bowie. The title track is my favorite. 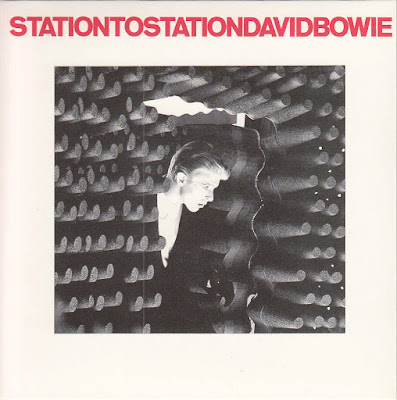 With "Station To Station" (1/23/76) Bowie moves into his "Thin White Duke" era, an era he is lucky to have survived. It's a very strong album, especially considering that he was taking so much cocaine at the time that he later said he didn't recall anything about making the album. The title track, all 10 minutes and 14 seconds of it is one of my all time favorite Bowie songs. The cover is a still from the movie that Bowie made with director Nicholas Roeg "The Man Who Fell To Earth". 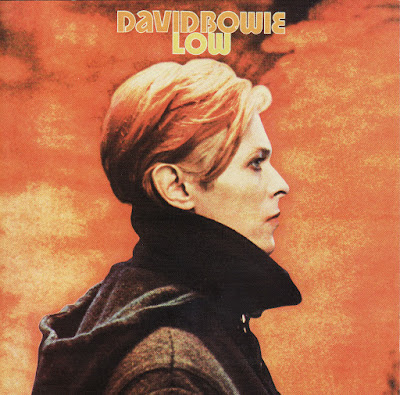 "Low" (1/14/77) begins the so-called "Berlin Trilogy" in collaboration with electronic musician Brian Eno. Compared to his previous work, there is a lot of difficult music here, not so nearly as accessible as his earlier work. He himself was going through a difficult time, trying to kick his cocaine habit. "Always Crashing in the Same Car" is my favorite from this record. 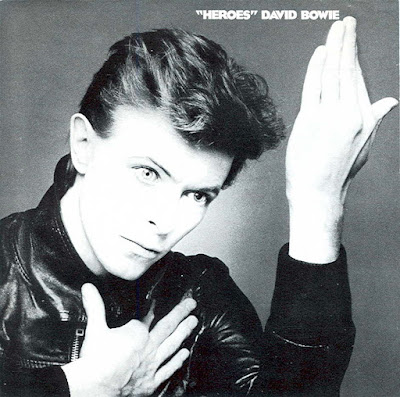 Although I liked "Low" and I own "Heroes" (10/14/77) I was getting a bit tired of Bowie at this time in my life. I didn't even buy "Lodger" the third in the Berlin Trilogy. Also, I wasn't listening to music as home as much as I used to so I'm not as familiar with the tracks here. Only the title track made much of an impression on me. I have the album in iTunes now along with another 16,000 songs, so I hear something from it once in awhile. 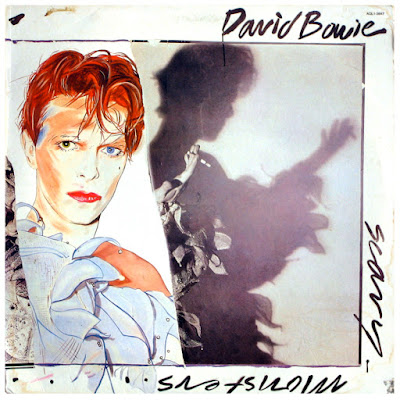 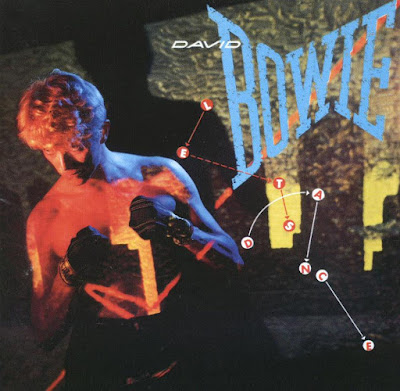 "Let's Dance" (4/14/83) was the fist Bowie album since "Station To Station" to get me excited. It was also Bowie's biggest success in years, selling 7 million copies, actually making it his best selling album. At the time I almost felt like a sell-out for liking it because it was so popular but I'd been a fan for long time by then and not just somebody jumping on the bandwagon. He'd had a hit with "Cat People (Putting Out Fire)" as a single the previous year, which is why I probably bought the album, but I think my favorite is "China Girl". 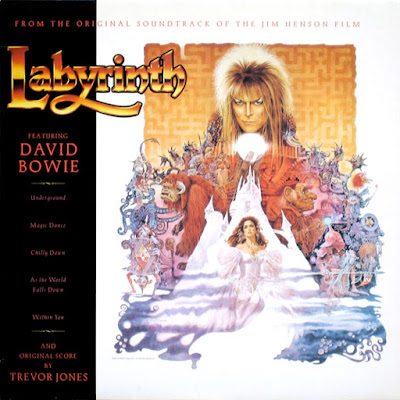 It may be a soundtrack album but "Labyrinth" is still a Bowie album. My wife and I saw the movie in theaters and love it. Davie Bowie and Jim Henson? Are you kidding me? "Dance Magic Dance" is the best song. Look for the video on YouTube.

I'm afraid that Bowie's next 7 studio albums made no impression on me at all. 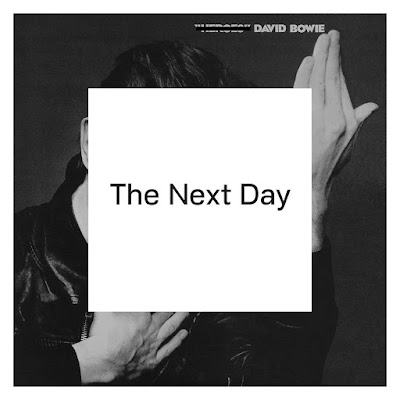 Released 3/8/13, "The Next Day" was Bowie's first release of new material in 13 years. It's a pretty solid rock and rock and roll album but nothing really grabs me like his earlier material. I don't mean that in a negative way. This was released over 40 years after "Hunky Dory". I've heard a lot of music since then. It's hard for anything to really grab me anymore.

I don't know anything about is just released album, "Blackstar" although I've seen the video for "Lazarus" and it's pretty disturbing considering his recent demise.

This has been a sad undertaking but as I'm writing this "Lady Stardust" is playing on iTunes cheering me up.
Posted by capewood at 10:00 AM