In the off-season, the Phillies traded their promising closer, Ken Giles to the Astros for 4 players. One of those players was Vincent Velasquez.

Valasquez started his 2nd game of the season, today, April 14. He was incredible.  He managed to throw a complete game, 3-hit, 16-strikeout, shutout against the Padres in Philadelphia. I only saw from the 5th inning on but it was a masterful performance. He mowed down Padre after Padre using mostly fastballs, clocking up to 97 mph. Only three Phillies have recorded 16 Ks in a game. Oh, and he didn't walk anybody. They would be Steve Carlton, Curt Schilling and Cliff Lee. Pretty fast company.

As near as I can tell, there are no 2016 Valasquez cards as yet, so I'm going to have to go with one of his cards from last year when he was still with the Astros. I believe he has more tattoos than Carlton, Schilling and Lee combined. 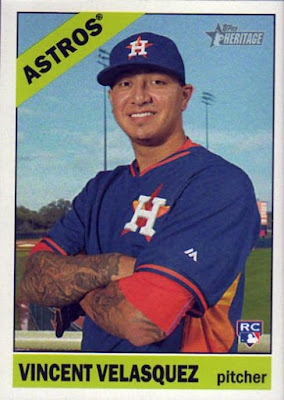 Funny you should post this card. As I was keeping track of the game at work, I was wondering if he had a card in Heritage last year. Very nice! Not a Phillies fan, obviously, but Vince is on my fantasy team!