In 1993, to celebrate their 100th anniversary, the Cracker Jack company released a 24-card set of mini cards recreating some of the 1915 set of Cracker Jack. I have the only Phillie in that set, Grover Cleveland Alexander. 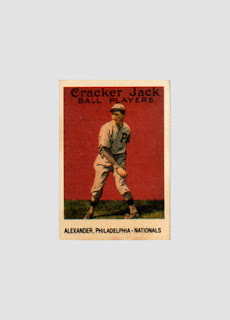 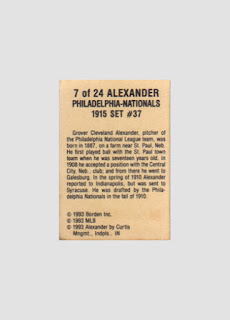 If you remember what the 2004 Topps Cracker Jack set (one of my favorite sets) looked like, you're know that the back of this card doesn't look much like 1915 Cracker Jack. The text is the same but this card has 3 lines of 1993 copyrights.

While researching my 1993 Phillies want list, I found another 1993 Cracker Jack Set which reproduces the entire 1915 set, with the original backs. The only reference I've been able to find is on tradingcarddb.com. Beckett.com doesn't mention it and neither do two large paper catalogs I have, the 2005 Beckett catalog and the 2008 Standard Catalog of Baseball Cards. These cards are a bit larger than the card shown above, but still smaller than a standard sized modern card.  If anyone knows anything about these please leave a comment. On tradingcarddb.com, these are called the 1993 1915 Cracker Jack Reprint set to differentiate it from the set above. 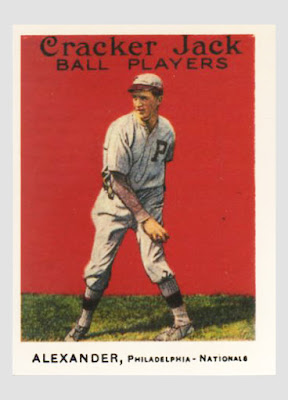 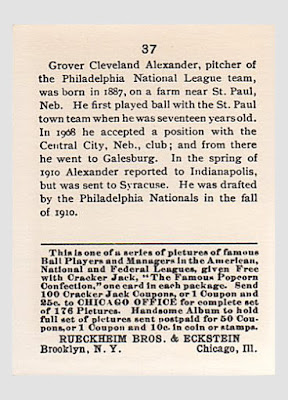 Grover Cleveland Alexander, who was apparently called Pete during his career was a 20-year player with a 373-208 career record. He spent the first 7 and the last year of his career with the Phillies. He was perhaps the only bright spot in the Phillies-Red Sox 1915 World Series, going 1-1 (the only game the Phillies won) with a 1.53 ERA. He was elected to the Hall of Fame in 1938. He was the subject of a biopic film in 1952. Ronald Reagan played Alexander and Doris Day played his wife. 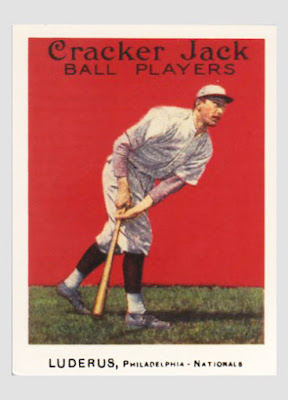 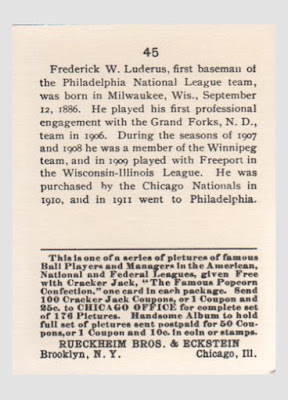 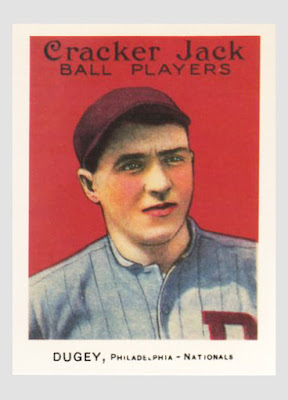 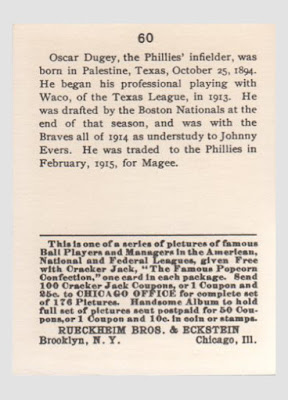 Here's a rosy-cheeked fellow they called Jake from Palestine TX. Born in 1887 he played for the Phillies from 1915 to 1917. He had no ABs in the 1915 World Series but managed to steal a base. 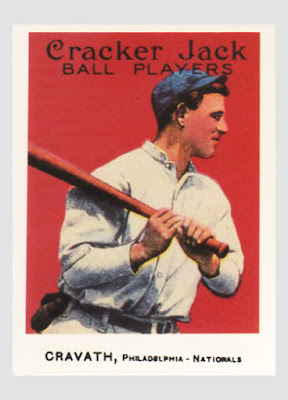 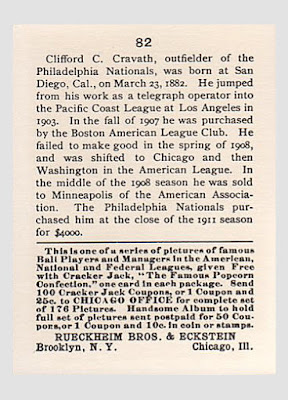 He got the nickname after killing a seagull ("gaviota" in Spanish) in flight. He played for the Phillies most of his career, from 1912-1920. He was a power hitter during the dead ball era, and became the first player in baseball history to win five home run titles. Most of that is probably related to playing home games in Philadelphia's Baker Bowl. Of his 92 career homers, only 25 were hit on the road. 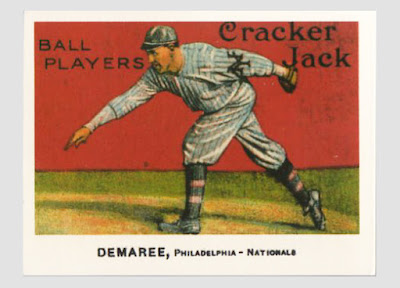 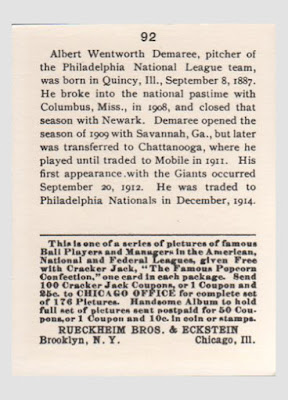 Even for 1915, that doesn't look much like a Phillies uniform to me. He played for the Giants in 1914 and appears on card #92 in the 1914 Cracker Jack set in this exact pose but labeled as a Giant. 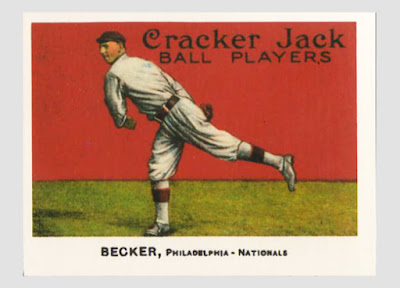 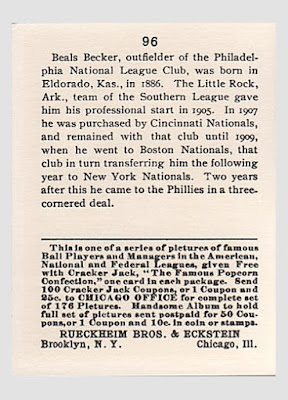 Another dead ball era power hitter. In 1915, with the Phillies, he was 4th in the league with 11 homers. In 1910 he was the first man to hit two pinch hit home runs in one season. Here's a direct quote from his Wikapedia article. "On episode #1309, (airing March 23, 2009) of PBS's Antiques Roadshow, a man who claimed to be Becker's great-great nephew brought two photographs and a uniform belonging to Becker to the show for appraisal. The items were valued at US$50,000." 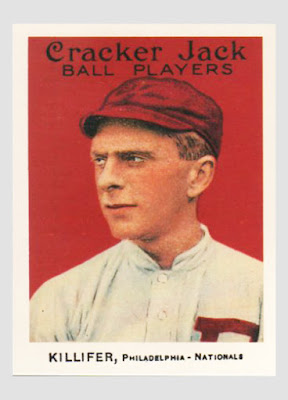 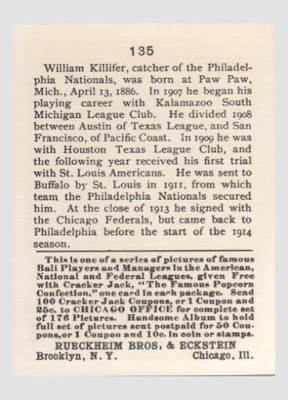 Known as Raindeer Bill due to his speed, he was Grover Cleveland Alexander's favorite catcher when they played together for the Phillies. Between playing, managing and scouting, Killifer had a 48-year baseball career. 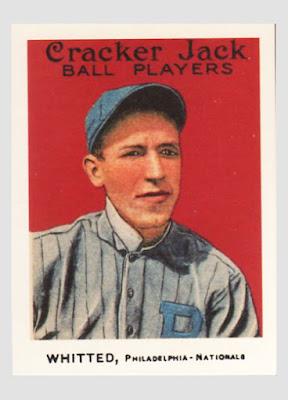 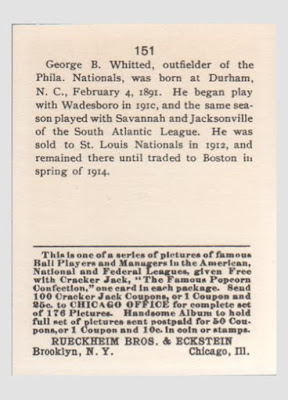 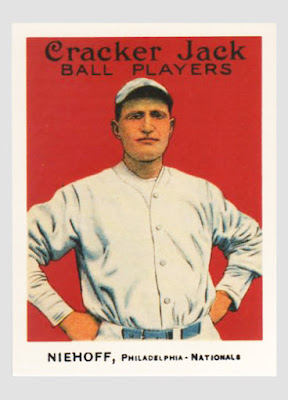 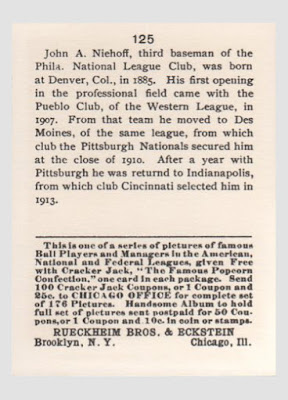 Of these 10 cards this is my favorite. It's just something about the pose. Bert (his middle name is Albert) had a 6 year career and was 1 for 16 in the 1915 World Series. After his playing career he was one of the first chosen to be a manager in the All-American Girls Profession Baseball League. He managed the South Bend Blue Sox in 1943 and 1944. He lived to be 90 years-old, passing away in 1974. 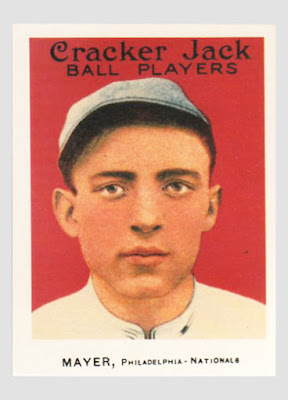 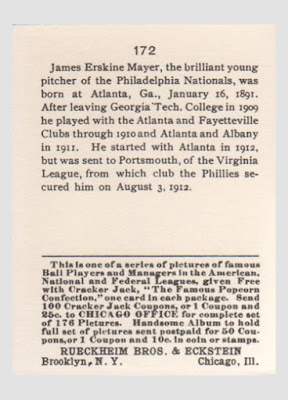 Mayer was a pitcher with a devastating curve ball. He was nicknamed "Eelskine" because his curve ball was "so slippery". He had a career record of 90-71 and is considered one of the all-time best Jewish baseball players in history. Honus Wagner hit is 3,000th hit off Mayer.

The Angels In Order said...

Makes for an awesome team set. Sometimes I wish the Angels went back that far.

The Angels In Order said...

Makes for an awesome team set. Sometimes I wish the Angels went back that far.