I threatened another post on this and here it is. Since the blaster box, I bought 4 rack packs and the Phillies related cards and the Astros card I didn't have on eBay. 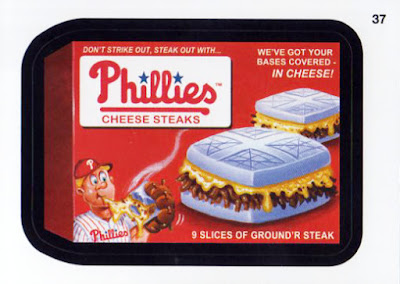 Philadelphia cheese steaks are, of course, a Philadelphia institution so this was a natural. "We've got your bases covered - IN CHEESE!" 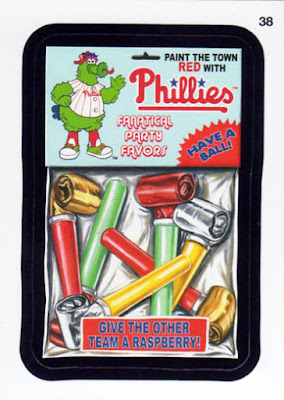 Of all the cards I have, only two feature a team's mascot. 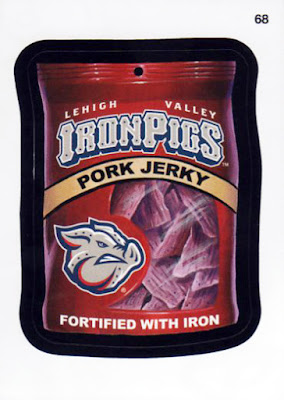 I guess this one is kind of obvious as well. Pork Jerky Fortified With Iron. The Iron Pigs are the Phillies Triple A farm club. For one night in June this year, the Iron Pigs will be called the Lehigh Valley Cheesesteaks, complete with new uniforms. 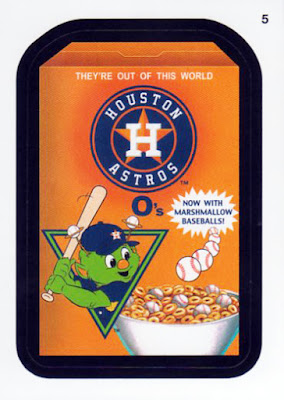 This is the other card I know of that features a team mascot, Orbit of the Astros. I'd buy Astro O's, They're Out of this World.

These rack packs also featured another parallel set aside from the Green Turf and Gray parallels I found in the blaster. 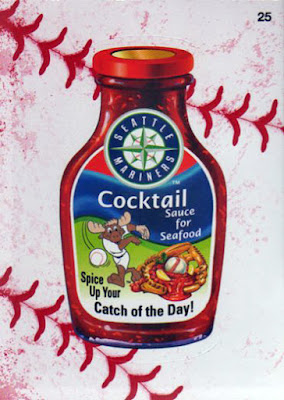 I now have 68 of the 90 cards. I think I've reached the limit of diminishing returns in regards to buying more rack packs or another blaster. Most of the cards I'd get would be duplicates. So I probably won't complete the set.

With 68 cards you'd think I'd be able to complete one of the card back puzzles, but no. This is the closest I got. 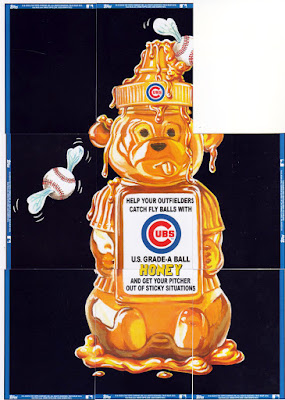 The card I'm missing is Dodger Blue Paint #19. Dang. I love the little winged baseballs buzzing about. Remember, you catch more fly balls with honey that you do with vinegar.
Posted by capewood at 10:00 AM

If you are interested in helping each other out on this set, shoot me a note with your set needs. I have to put a list together but think I am about 10-20 stickers away from the set.

I've got a lot of dups so let's arrange a trade.