Although I enjoy the Marvel Universe movies, I was a DC kid growing up, and Superman was always my favorite super hero. That's why I had to see "Batman V. Superman: Dawn of Justice". 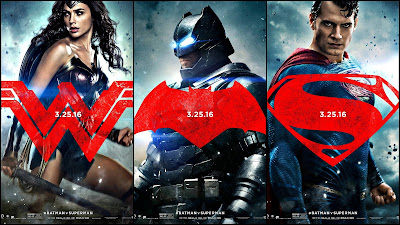 I'm very much of a different opinion than many of the movie critics. We went into this expecting to not like the movie but my wife and I loved it.  After seeing the film, I'm convinced that some of the reviews were based on the trailers rather than the actual movie.

In the comics, Batman and Superman were the greatest of friends, but they also fought a lot, so the theme here isn't unfamiliar. This movie is a direct sequel to 2013's "Man of Steel". In fact, the movie starts with Bruce Wayne (Ben Affleck) down on the streets of Metropolis while Superman is fighting General Zod above the streets.  He's driving through the streets dodging cars and debris trying to get to the Wayne Industries building. He gets there just in time to watch the building crumble and to rescue an employee whose legs are crushed under a beam. This guy shows up later in the story and becomes an important plot point.

This is the set up for why Batman, a long established and feared, vigilante in Gotham, believes that Superman, the new superhero on the block, is such a menace. Superman is having his own troubles. Although mostly well-loved in Metropolis (the area destroyed in the fight with General Zod has been turned into a park with a giant Superman statue and the remains of Zod's ship) there are some who share Batman's suspicions. In particular, Senator Finch (Holly Hunter) is holding hearings on Superman.

The third main character in this battle is the evil mastermind Lex Luthor (a manic Jesse Eisenberg), who is manipulating Batman, Superman and Senator Finch to bring about the conflict of the title.

Finally you have the final two characters in the battle, Wonder Woman and Doomsday. Wonder Woman had been seen several times earlier in the film in her civilian clothes (a series of designer fashions) as she steals the device Bruce Wayne was using to steal data from Luthor. She later returns it to Bruce and from it he (and we) learn of other metahumans (like Aquaman and The Flash). While reviewing the data, Bruce has what seems like a vision, or dream of a future post-apocalyptic future where Batman is fighting soldiers with Superman logos on their shoulders while man-sized winged creatures are carrying people off. This was perhaps the most confusing scene in the trailers. Here, it's a warning from the future (or an alternative universe) from the Flash. You've got to be pretty geekily into the DC universe to realize this, which I'm not. That piece of information came from io9.com.

Too many spoilers will be involved in explaining where Doomsday came from. I've perhaps already given away a major plot point by revealing that the creature shooting flame from his mouth is Doomsday.

There are a lot of questions raised by the premise of the movie and the trailers. Why is Batman so angry at Superman? How does he think he even has a chance in such an encounter? Superman is clearly pulling his punches in the trailer (he even says "If I wanted it you'd be dead already") but why is he pulling his punches? Why does Batman seem to so easily throw away his difficulties with Superman? In the trailers it seems they unite to fight Doomsday, but it's more than that in the movie. Where has Wonder Woman been all this time? What does "Dawn of Justice" even mean?

I thought that the movie had a credible plot and credibly answers all these questions. And it did a great job of setting up the future Justice League (DC's answer to Marvels The Avengers) movies.

I thought Ben Affleck was pretty good as Batman. He plays a much darker Batman then even the Christopher Nolen movies. Here Batman seems to mostly be going after child molesters and pimps. When he catches someone he brands a bat into their chests. Jeremy Irons, as Alfred is pretty good. The two of them seem to have been in the crime-fighting thing for a long time and both seem quite tired of it. I didn't care much for Henry Cavill as Superman in "Man of Steel" but he's better here. I still don't much care for Amy Adams as Lois Lane. Laurence Fishburne does another good turn as the scene chewing Perry White. Eisenburg plays Lex Luthor like  he secretly wants to be The Joker but he's an important figure in the movie.

i liked it, too. and, i was also a dc kid with superman and the flash as my favorites. the scene with the flash is reminiscent of the crisis series where the flash runs through time and appears before a few people while destroying the anti-monitor's anti-matter cannon before dying. ok, i'm done geeking out.