I didn't see any blaster boxes of this product so I bought some of the 24-card rack packs. In keeping with my 2016 card-buying policy, that's all I'm going to buy. I've never really been that enamored with Topps Opening Day, especially when they stopped putting on the large embossed silver shield on the front after the first couple of years.

Here's the first card out of the pack. 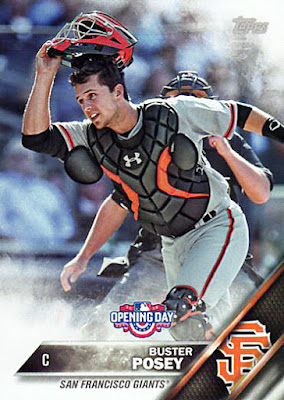 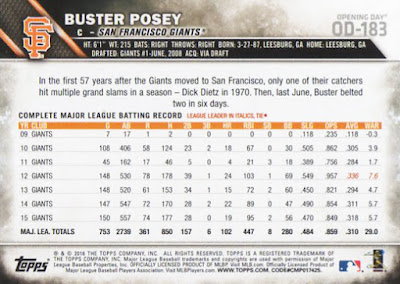 Hey, it's the four-armed Buster Posey card I featured in my post of 2016 Topps. It's what I expected, the base Topps design without foil and the Opening Day logo. Is that logo getting smaller each year? There is apparently an alternative version of this card, but really, who cares? This year Topps added the OD- prefix to the card numbers. I guess to further differentiate from the base cards? I was hoping that Topps would do something a little different with Opening Day this year, like maybe put the borders back on.  No luck.

There were 21 base cards in the pack, one foil card and 2 different insert cards. 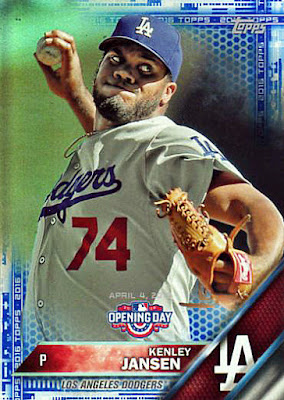 Has anyone figured out what that honeycomb pattern is supposed to be on these foil cards? The back, of course, is the same as the base. 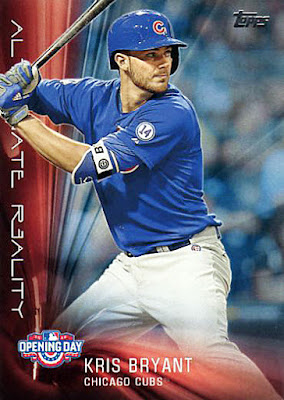 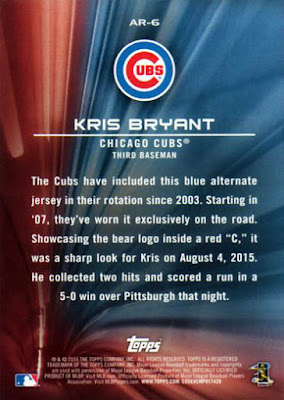 This is the 15-card "Alternate Reality" insert set. It features players in one of their teams alternate jerseys. This card links an appearance in the uniform to a big night the player had.  Pretty ho-hum as insert sets go. 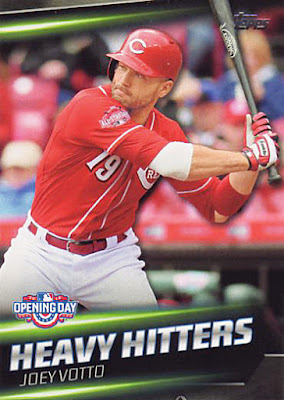 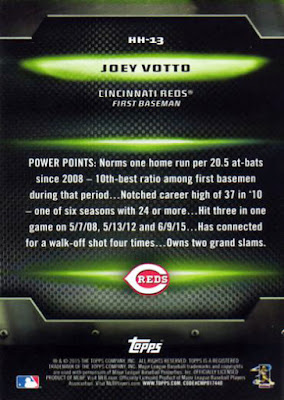 Another pretty ho-hum set featuring home run hitters. I guess it must be hard thinking up novel ideas for insert cards. Maybe we need fewer of them.

I fear that the honeycomb pattern on the foils will become the next random parallel Topps puts out. They'll take their crazy number of patterns from Topps Hi Tek and use them on the base set to create another 12 parallels instantly.

Because, after all, we need more of those (sarcasm)....

FYI, there's a link to this post from Uni-Watch.com; if you scroll down to the Baseball News section of the "News Ticker", there's a reference to the Alternate Reality inserts and a link here.

Another disappointment from this year's OD: No more 3D cards. The "Opening Day Stars" inserts are now stickers.

I meant to include a URL with my previous comment:
http://www.uni-watch.com/2016/03/19/true-colors-volume-iv-the-colors-of-spring-training/

That is disappointing. I didn't pull any of the Opening Day Stars cards so I didn't know. Stickers?!

@shlabotnikreport thanks for sharing the link that has a link to my post. I'd have never figured out why this post got so many hits. By far the most hits I've gotten on any post.

The Opening Day Stars cards are just that... CARDS, not stickers. And I have probably just bought my last box of this offering from Topps. (I really should have looked into this year's lineup as I probably wouldn't have bought this box)

As I love the Mascots insert, I normally chase them. But having switched over to a "1 insert card per pack" model, it makes it WAY to difficult to complete any one insert set from this now, and will leave me buying a set from here on out.

Out of my 36 packs * 7 cards per pack, I did complete the base set barely, and pulled 42 inserts.

I did get a few of the foil parallels and have not looked for nor do I expect to have any variations. I really must say this was a disappointment for me this year as I don't believe this product is worth the price of admission now.