Trade with John in UK

What with a cardiac catheterization, a hurricane and no internet until yesterday (because of the storm), I've not been able to post much in the past two weeks or so. But all that is behind me now.

A few weeks ago I saw these cards called "Phil Rizzuto's The National Pastime" posted someplace (probably A Pack A Day). I commented that I really like the cards so, John, the poster, sent me some packs plus some Phillies cards. These cards are even better looking in person then in a blog.

They are a collection of baseball images from the late 1800's and early 1900's. Some are of old baseball cards, but there are also games, magazine images and old photos. You might think that the chrome finish wouldn't go well with the old time images, but the cards are very attractive. The readers of the Dinged Corners blog will recognize this image which came from a vegetable crate in the 1930s. 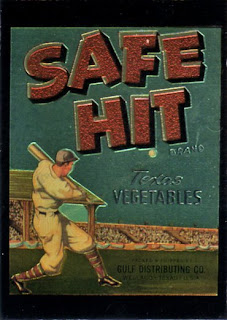 This next one is from satirical set produced in 1885. They were used by businesses as advertisements for products or services, as well as premiums for regular customers. Did I mention that the back of each card has a description of the image? Many of them have a piece of baseball trivia as well. 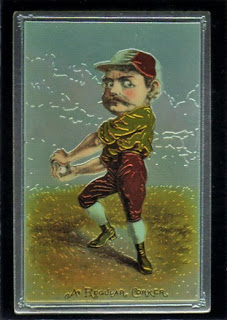 Dave also saw that I was a Phillies fan so sent me a random collection of Phillies cards. This next card is from the 1987 Donruss All-Star set. The card is 3 1/2 by 5 inches. These came packaged with Donruss Pop-up Cards. I had some of the Pop-ups but hadn't seen the All-Star cards. 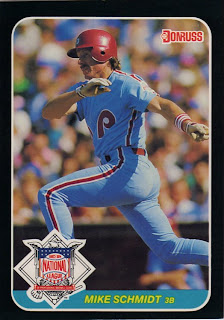 Also included was this 1983 O-Pee-Chee Tug McGraw card. I only had three cards from this set and no Phillies. 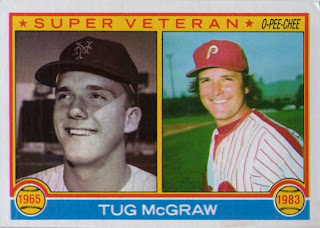 Thanks to John for the great cards. Now I have to find some Red Sox cards I think he'll like.
Posted by capewood at 7:34 PM

I don't remember seeing that Rizzutto set on APAD. They look pretty cool, may have to check in to them.