The 1990s Baseball Cards Face-Off - Which Set is the Best

I started with a list of 256 sets produced during the decade. I wanted to include only the mainstream sets, eliminating parallels and update sets. I did not include insert sets, short boxed sets, cards that focused on something other than that's year's players (so no 1953 Topps Archives) or cards that came with food products. I also wanted to only include sets which appeared in more than one year (preferably every year) but had to include those short run sets in order to bring the total to 256. I'm going to have a tournament, with brackets like the NBA playoffs. I had to have 256 sets to make it work out properly. There will be 4 divisions of 64 sets each, going head-to-head until there is only one set left standing. The Divisions will be: the Babe Ruth Division; the Ted Williams Division' the Mike Schmidt Division; and the Nolan Ryan Division. I seeded the sets randomly into each division. I was going to devise some criteria for judging each card and a point system but I'd never stop arguing with myself over how this should look. So it's all going to be based on my own opinion. Feel free to chime in with your opinions.

I'll report the results by a quartile of each Division. The bracket for a quartile will look like this. 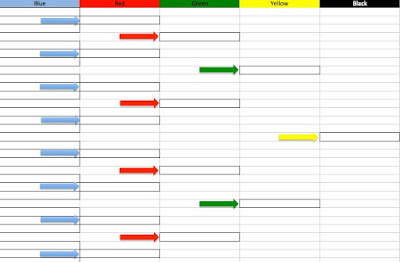 The yellow level will be the quarter finals of the whole division. Here's the 1st Quartile of the Babe Ruth Division. 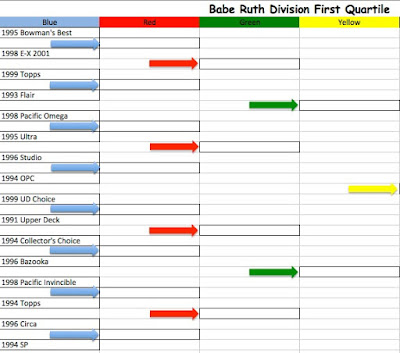 I own at least one card from each of the 256 sets so all the cards I'll be showing are from my collection. Let's get going with the first two match-ups. 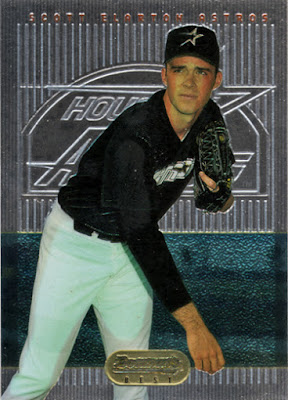 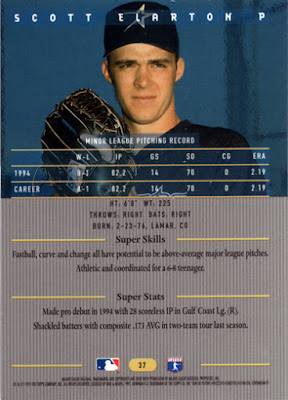 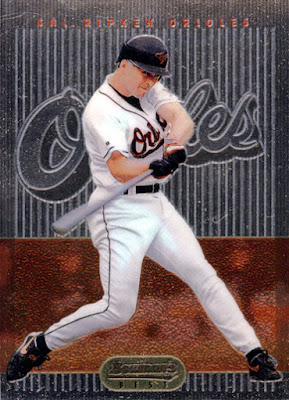 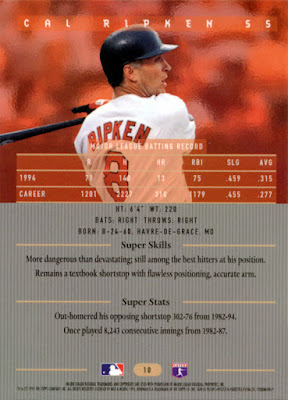 1995 Bowman's Best came in 2 flavors: Blue was for rookie cards and Red for veteran cards. The fronts were bright foil and glossy and the backs were glossy. 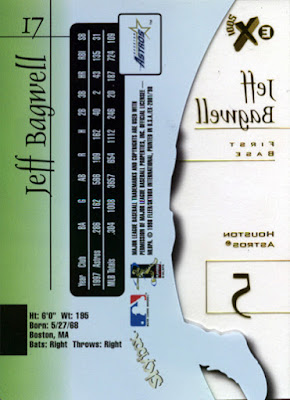 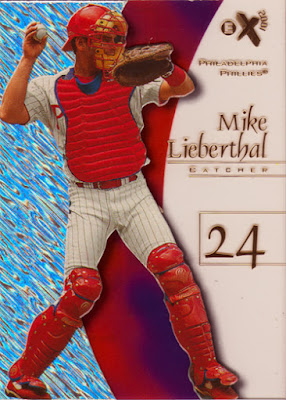 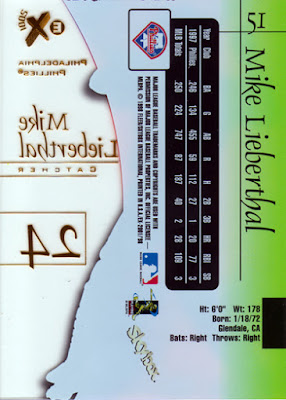 Results: Right out of the box we get a difficult choice as I really like both of these sets. I'm going with E-X 2001. There are only a handful of sets where all the cards are printed on plastic. In my opinion, that's a edge, just the sheer novelty of it. The choice of card stock is just as much a part of the design as the graphics and the typography. But that's not the only reason I'm choosing it. I think the cards graphics are better. The Bowman's Best cards all start to look alike after awhile while the player graphic in the E-X just pops out and keeps the visual impact from card to card. 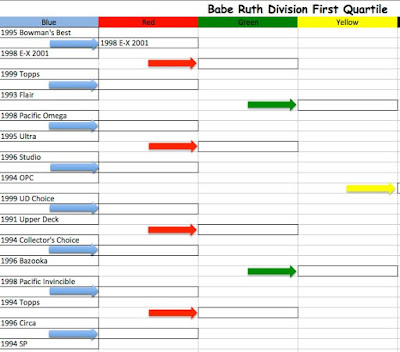 This has turned into a long post so we'll pick this up tomorrow.
Posted by capewood at 10:00 AM

Wow! This is an ambitious project and I'm definitely looking forward to following along. I agree that the 1990s is an extremely under-appreciated era of baseball cards.

But looking forward to countdown/bracket-off!