It's time to open up another repack and see if I got a bang for my money or just a bust.  This is one of the Fairfield plastic boxes with 250 loose cards and a couple of packs. All together that's about 265 cards working out to about 4 cents/card.

My baseball card collecting mantra is "If it's a card I don't have, then I need it". I judge a repack like this on two criteria, how many cards did I need, and what was the quality of the cards. This box was not too bad on the number of cards I needed as I pulled 110 cards from it I didn't have. Normally I'm happy if I'm near 50%. On the other hand, I got some good (in my opinion) stuff in it. I'll give this a: 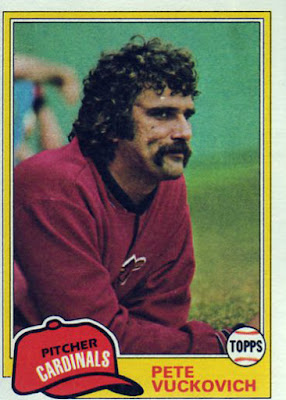 The Mad Serbian. This card almost made the whole box worth it. 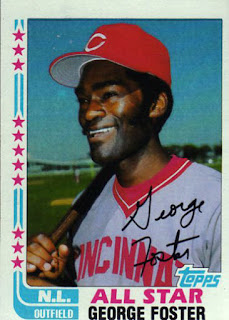 A good player from a good set. 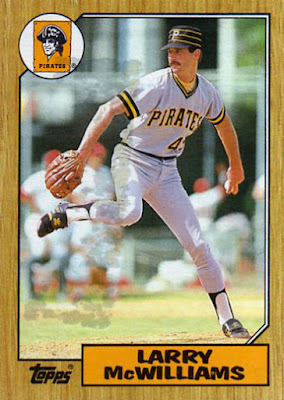 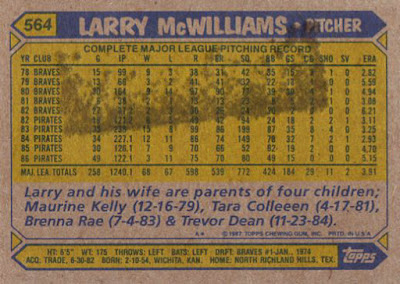 I don't get excited seeing 1987 Topps in a repack since I have the entire set. One hazard of early Topps cards is gum stains. I think this may be the worst gum stain I ever saw. It not only ruined the back of the card but the front as well. 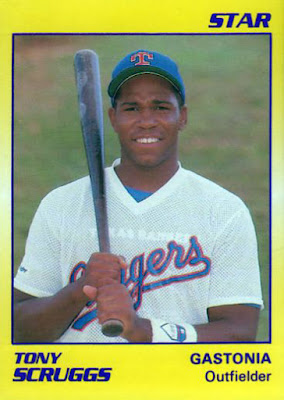 Nothing special here except he's a player I never heard of. I like to look guys like this up on baseball-reference.com. Scruggs appeared in 6 games, getting 6 at bats in April 1991. He had no hits or walks but managed to score a run as a pinch runner. 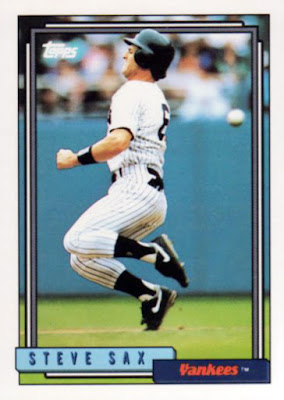 I'm guessing that Sax is going into a slide at second. Look at where the ball is relation to Sax. Sailing into center field. 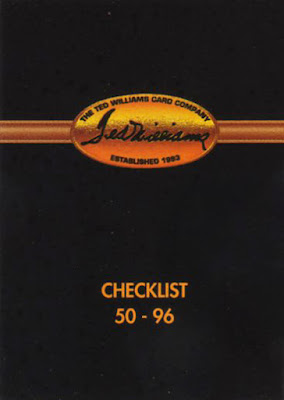 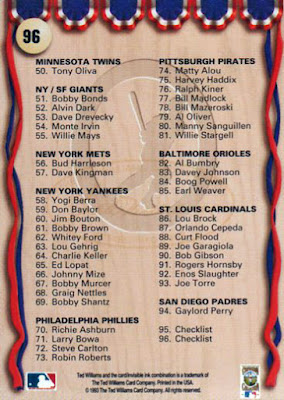 Let's get excited about a checklist. I only have 30 cards from this 160 card set and I didn't have a checklist. This goes into the reference books. 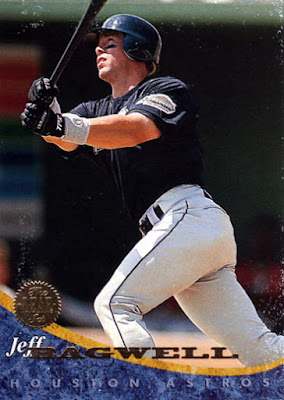 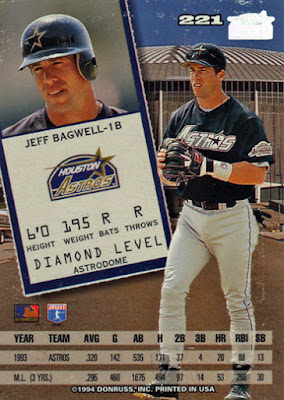 I have over 500 Jeff Bagwell cards, but I didn't have this one, and I like this year of Leaf as well. Like many glossy cards from this era, the card shows some damage from being stuck to other cards. 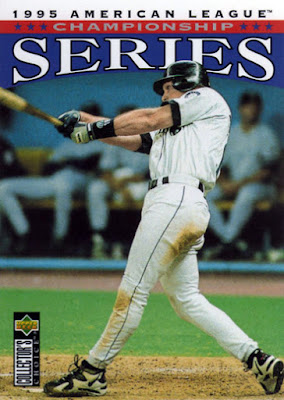 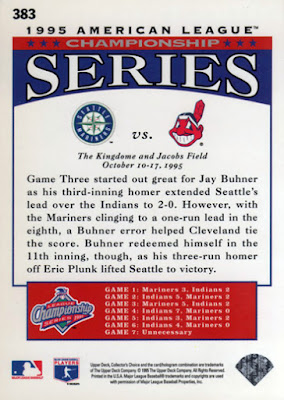 Another card for the reference books. 1996 Collector's Choice was a 730-card set with a lot of subsets. I didn't have any of the postseason cards from the set. 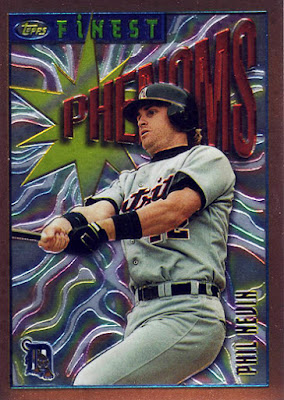 Does anybody remember the great peel or not to peel debate of the mid-1990s? My advice, peel 'em. 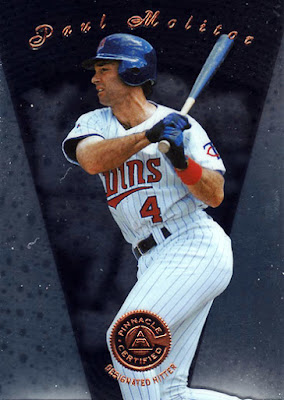 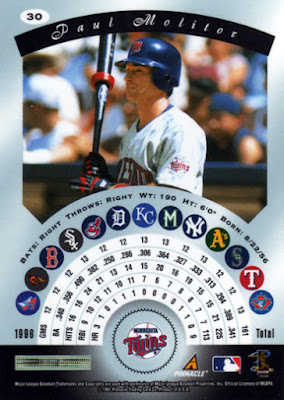 Another card with a peel. This is only the second card I've ever seen from this product. I have a red mirror parallel of a Phillies rookie I got in a trade a few years ago. This is one of those cards that are impossible to scan. It's basically a mirror on the front. And get a load of the pinwheel o' stats on the back. 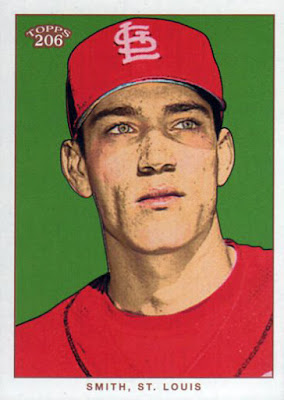 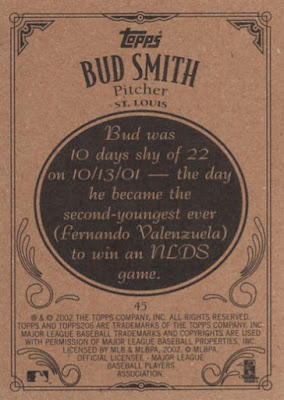 Here's a set I wish I had bought more of when new. Hobby boxes of this product are going on eBay for $146. 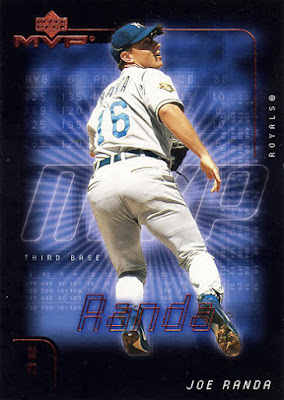 What a mess. Upper Deck MVP was produced from 1999 to 2005 and I didn't like any of them. Especially this year. you can get 2 hobby boxes of this product on eBay for about $25. 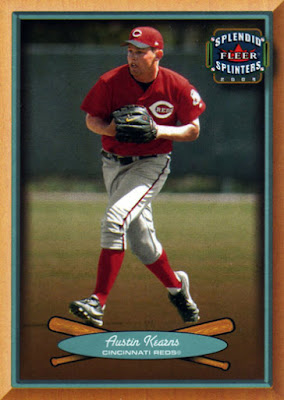 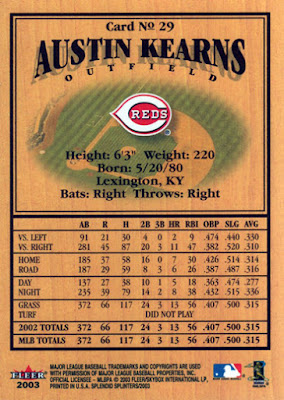 In the early 2000s, Fleer produced a bewildering number of sets.
Posted by capewood at 10:00 AM

Great action shot on the 87T McWilliams! Plus... I'm pretty sure gum stains are the hobby's latest trend ;)

That Vuk card cracks me up. I like the Finest card, even if it is Phil Nevin.