Jeff Bagwell finally got nominated for the Baseball Hall of Fame this year. I've already made one post recently about him, and I've got enough Bagwell cards (536) to do several more. With this post I want to show some recently acquired Bagwell cards.

I was idly searching for Bagwell cards on eBay the other week and came across an offer for 30 different Bagwell cards for $10.75 (including shipping). The seller was nice enough to actually list the cards he was offering and I saw that I needed 27 of them. Most were 1990s inserts and parallels.  Here are my favorites. 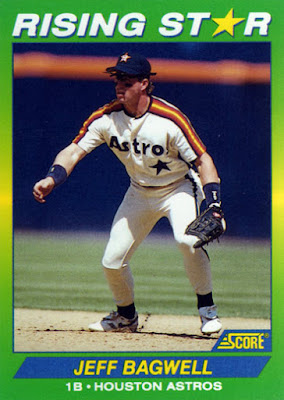 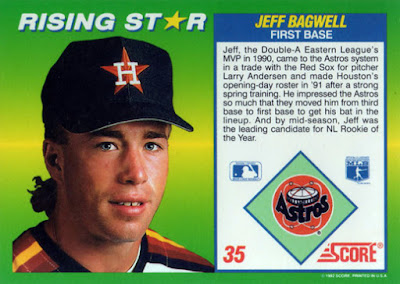 24-year-old Bagwell looks like he just ran in off the high school playing field on this card. 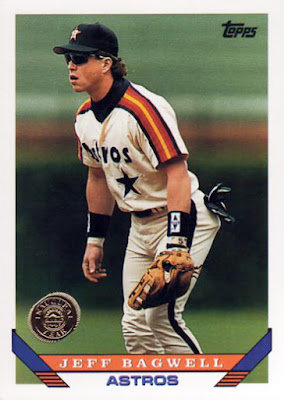 Topps put out an entire parallel set to honor the new Rockies and another for the Marlins inaugural season. I believe these were only available as boxed sets. I had one other from the Rockies set but I've never seen one from the Marlins set. Pretty rare, I'd say. 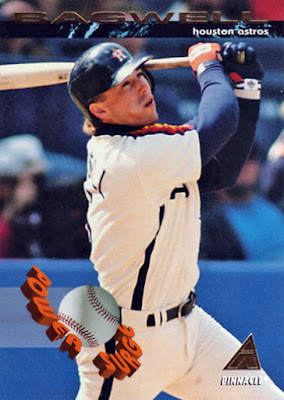 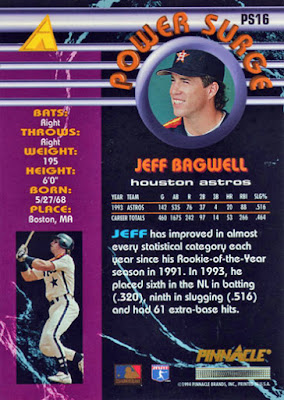 Not only a Bagwell card I didn't have but an insert set I didn't know about. This goes right into the reference books. 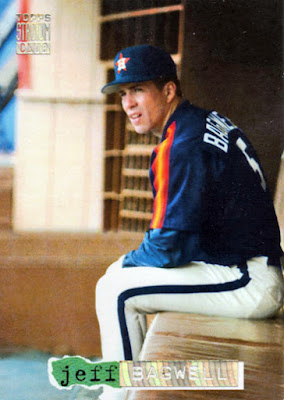 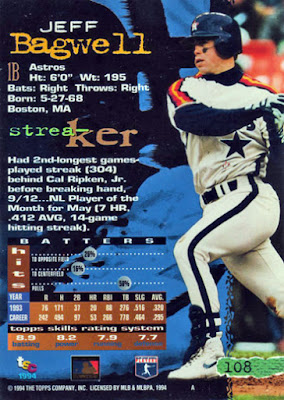 1994 saw a sharp rise in parallel sets. And this was how it was often done, putting foil on the front, or if the card already had foil, putting different foil. These weren't particularly hard to get in packs of 1994 Stadium Club. 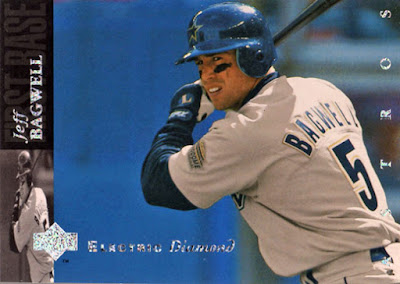 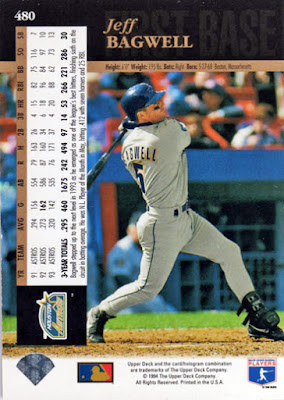 I always like this parallel. My recollection is that it was a tough pull in 1994 Upper Deck. 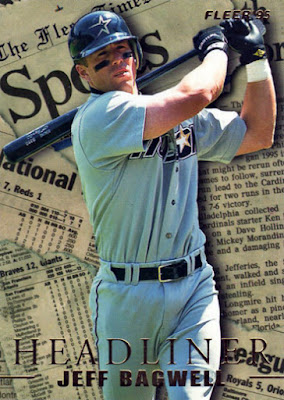 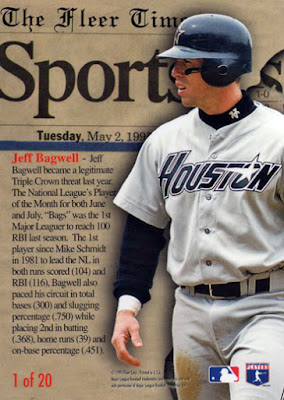 I have several cards from this insert but never noticed the text on the story from "The Fleer Times" behind the photograph on the front. It's describing a Phillies game where Tony Longmire hit a pinch hit home run to win a game over the Cardinals. Since Tony Longmire only hit 3 home runs in 1995 it probably wouldn't be too hard to find what game it was. I looked at the other cards I have and they all have the same background. 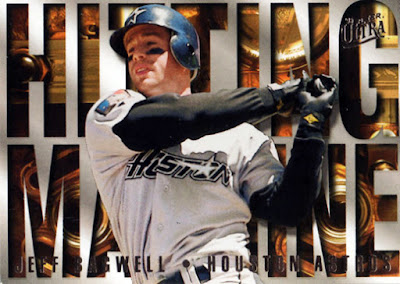 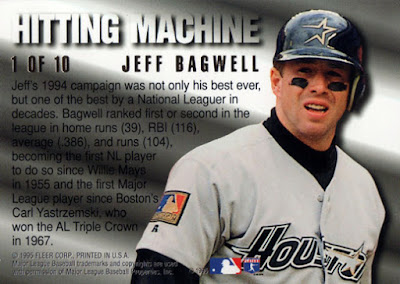 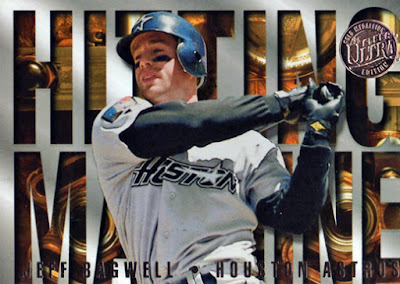 I had the Frank Thomas version of the base card. Now I have the Gold Medallion version as well. 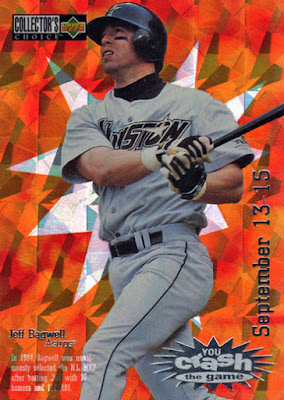 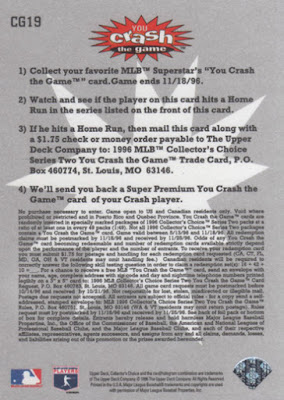 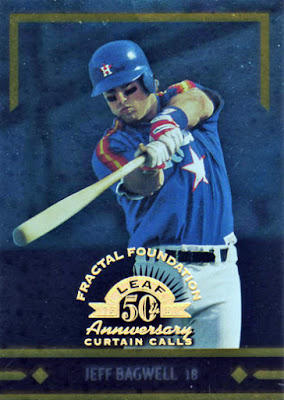 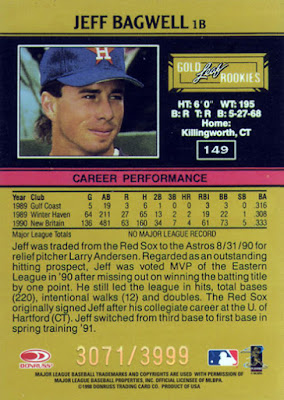 Leaf had a pretty complicated system of parallel cards in 1998. 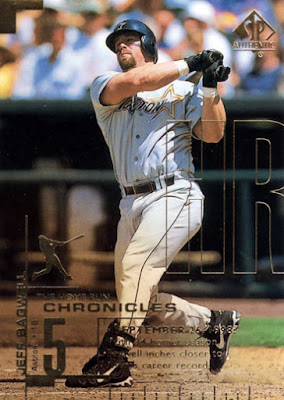 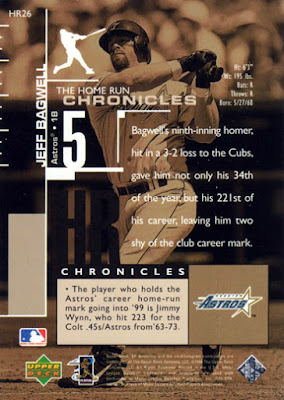 1998, of course, was the year of the Home Run. I only have a few of these cards and find them unattractive. Lots of gold foil nonsense on the front. Since the card mentions a specific home run on a specific date, you'd think that maybe the photo would be of the player hitting that home run. Not in this case since the Astros were at home and Bagwell is in an away uniform.

2002 UD Superstars Keys to the City 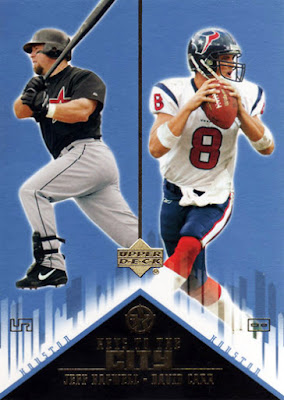 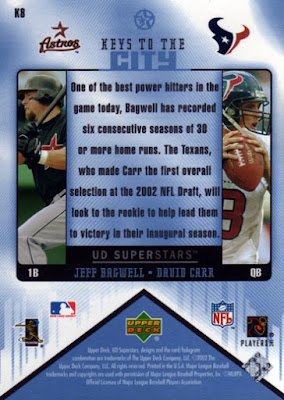