I bought one 30-card rack pack of Topps Attax. For my sins, Topps also included a ToppsTown card.

The cards are not inserted into other Topps products so you have to go out of your way to buy them.
The cards are actually numbered this year.

The cards are ugly.
They have rounded corners.
The raging forest fire background (did I mention they're ugly).
The side with the picture looks like the back of a card.
The other side is boring.
The card number (say on the Victorino card below) looks like 185/258. This would lead me to believe that there are 258 cards in the set. The checklist which came in the pack only lists 245 cards.

I'm only going to show a few of these. Once you've seen one, you've pretty much seen them all. 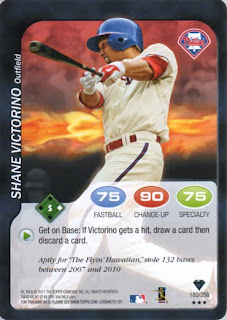 If you look closely at the smoke above the flames, you'll see that there are actually people. These are probably the tortured souls of those dammed to buy any cardboard rectangles with baseball players printed on them. 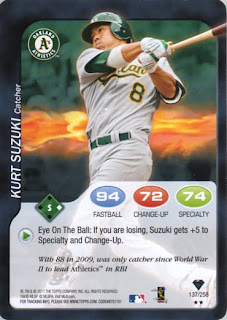 Some of the cards have little tidbits of information about the player. On this card it says "With 88 in 2009, was only catcher since World War II to lead Athletics in RBI". Mr. Suzuki was born in Hawaii and probably has a birth certificate to prove it. I don't really know but it is probably safe to guess that he is of Japanese ancestry. Maybe I'm crazy but do you see a problem with that little tidbit of info? 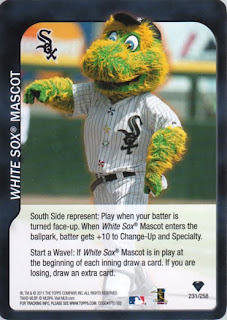 This is something new in the Topps Attax set, mascots. It looks like if you draw a mascot card good things happen to you. According to the card, this is the White Sox Mascot. Does this poor creature have an actual name? 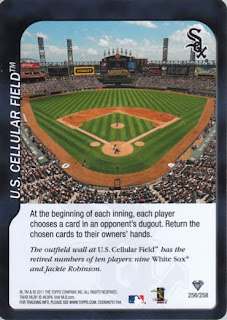 Another new card, the stadium card. Naturally as a Phillies and Astros fan I get the White Sox mascot and stadium. Read what it says on the card. Does that make sense? I assume it does if I knew the rules. But I don't want to know the rules. 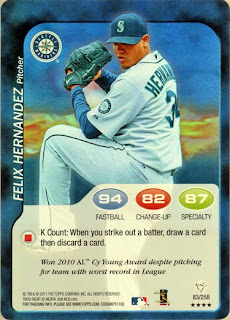 This is one of two foil cards I got and the only pitcher. These cards are not listed at Beckett.com or on baseballcardpedia.com so I have no idea if there is a whole foil parallel set or if just some of the cards have foil.
Posted by capewood at 12:52 PM

I care.I still like them, but I agree the background is awful. The colouring reminds me of an awful product Upper Deck put out in 1993 called Triple Play. Big black borders, lots of oranges and reds.

"I bought one 30-card rack pack of Topps Attax. For my sins, Topps also included a ToppsTown card."

That made me lolz.

The White Sox mascot is named Southpaw. He even has a Twitter account. I pulled a few Phillies from Attax if you are interested in them.

If you think Topps Attax cards are baseball cards, I agree - they're awful.

I'm happier with this year's set because they are starting to look like the collectible trading card game cards that they are actually supposed to be.

(I'm still probably not going to buy them.)

Steve, of course he'd be called Southpaw. I wonder why they didn't put his name on the card like they did some others.

I just bought a pack earlier today and I don't love the look but I'll definitely try and finish the Astros in the set. I don't know if I'll try and get their foil cards as well but we'll see. Nothing better than Junction Jack in foil, ha.

Be prepared to spend many a day collecting this set. It appears that the base set of 258 cards does not include the HOF players, and with the Gems Rarity of Black, Silver, Gold and White there are over 1032 cards to collect let alone the foil card set is the same there are well over 2000 cards to collect well here goes happy hunting days:).

Except most people aren't going to try and complete this set. This isn't a set that was made around trying to complete. It's made around playing a game. If I have a base card of Ichiro... why would I want the foil Ichiro card?? It doesn't have better stats or anything. The only difference is the look.